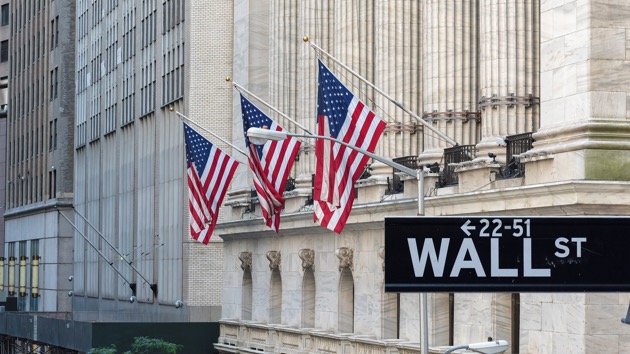 lucky-photographer/iStock(NEW YORK) — Stocks ended the day higher on Monday but were still lower for the year in what turned out to be the worst year for stocks since 2008.
The Dow ended the day at 23,327.46 up 265.06 points or 1.15 percent for the day. The Dow is down 5.6 percent for the year.
The S&P 500 ended at 2,506.85 up 21.11 points or 0.85 percent – down 6.2 percent for the year.
The tech-heavy NASDAQ ended at 6,635.28 up 50.76 points or 0.77 percent.
Stocks appeared to react to indications, including a tweet from President Donald Trump, that there may be some thawing in trade tensions with China.
It has been a roller coaster December for stocks, with the worst-ever Christmas Eve sell-off followed by the biggest one-day point gain on record the day after Christmas.
The same headwinds that plagued stocks in 2018 are likely to continue in the New Year. A possibly worsening trade dispute with China, the impact of higher interest rates and worries about continued economic growth will all be among factors impacting stocks.
Copyright © 2018, ABC Radio. All rights reserved.

At risk of falling short on vaccine goal, Biden marks new milestone: 300M shots under his watch
Why these 2 Missouri counties’ COVID-19 surges are among worst in the country
Memorial Day weekend marks first holiday with less COVID-19 stress
How to see the “Super Flower Blood Moon,” 1st lunar eclipse of this decade
Most popular baby names in US revealed as birth and fertility rates decline
Rob Lowe marks his 31st anniversary of being “drug and alcohol free”