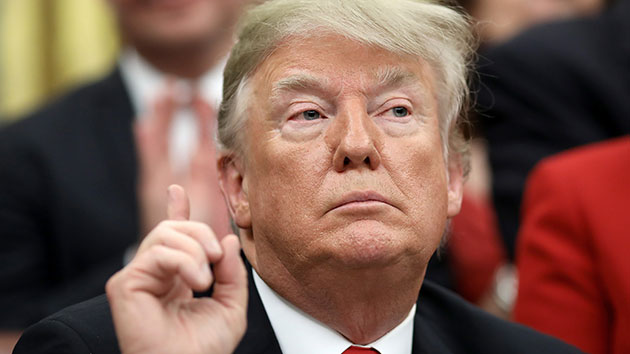 Win McNamee/Getty Images(WASHINGTON) — President Donald Trump blamed Democrats on Saturday for the recent deaths of two children in U.S. Border Patrol custody as his Homeland Security secretary called on Congress and the courts to solve the immigration crisis.
“Any deaths of children or others at the Border are strictly the fault of the Democrats and their pathetic immigration policies that allow people to make the long trek thinking they can enter our country illegally,” Trump tweeted. "They can't. If we had a Wall, they wouldn't even try!"
Trump’s tweets came during Homeland Security Secretary Kirstjen Nielsen’s weekend trip to the border following the deaths of two children in U.S. custody.
Border officials say they are experiencing an unprecedented spike in the number of families traveling with young children to claim asylum. The 7-year-old girl and 8-year-old boy — Jakelin Caal Maquin and Felipe Gomez Alonzo — Trump referenced died within weeks of each other.
Both were in U.S. custody at the time.
In a follow-up tweet, the president also said the children were "very sick before they were given over to Border Patrol."
"The father of the young girl said it was not their fault, he hadn’t given her water in days," he tweeted.
Contrary to Trump's allegation that the children were already ill when they were detained, Jakelin's father said the girl had eaten and was hydrated during the trek to the border. It took 90 minutes for her to get medical attention after agents first learned she was sick, according to a DHS account of the incident.
The boy's mother told reporters that "he wasn't sick” when the young boy left home, and he was under the care of agents for several days before he died. His official cause of death remains unknown, and an investigation is ongoing.
The deaths of the children raised questions about whether the administration adequately prepared for an expected influx of migrants.
The government has been partially shut down over funding for Trump's proposed wall for more than a week now. The president has repeatedly threatened to close the border entirely if Democrats don’t agree to his financing demands.
But Sen. Chuck Schumer and Rep. Nancy Pelosi, who is expected to become speaker of the House again next week, have been warring with Trump ever since an Oval Office visit erupted over funding for the wall.
Schumer has said the president owns the shutdown, derisively calling it the "Trump Shutdown."
"The President wanted the shutdown, but he seems not to know how to get himself out of it," Schumer tweeted on Monday. "As long as the President is guided by the House Freedom Caucus, it’s hard to see how he can come up with a solution that can pass both the House and Senate and end his #TrumpShutdown."
Pelosi, meanwhile, said the death of the children is "unconscionable."
“We all have a moral responsibility to ensure all children of God are treated with compassion and decency," Pelosi said in a statement.
But Nielsen called on Congress Saturday to “put politics aside” and fix what she called a “growing security and humanitarian crisis” at the border.
The secretary further highlighted her belief that U.S. courts shoulder partial blame for the crisis at the border, suggesting past rulings have been incorrectly decided.
“We know that if Congress were to act, or the courts were to enforce the law as written, we could address this crisis tomorrow; instead, we continue to do more with less,” she said in a statement.
Nielsen traveled to El Paso, Texas, on Friday to meet with the city’s mayor and planned to meet with border authorities in Yuma, Arizona, on Saturday.
“As I have said before, I ask Congress to please put politics aside and recognize this for the growing security and humanitarian crisis it is. DHS continues to stand ready to work with Congress on commonsense legislative fixes to secure our borders, protect communities, protect vulnerable populations, and ensure both a safe and orderly migrant flow as well as facilitate legitimate trade and travel,” she added.
Nielsen’s insistence that Congress and the courts are to blame is only part of the equation. The Trump administration knew weeks in advance that large groups of migrant families were headed to the U.S. border.
But it was a 1997 court settlement, known as the Flores agreement, that determined the federal government couldn’t hold children longer than 20 days.
Congress also is in a position to respond to the crisis by approving resources for U.S. border and immigration programs. Democrats have said they support additional money for overall border security, but do not support directing money toward building a massive security wall, as Trump has suggested.
Copyright © 2018, ABC Radio. All rights reserved.