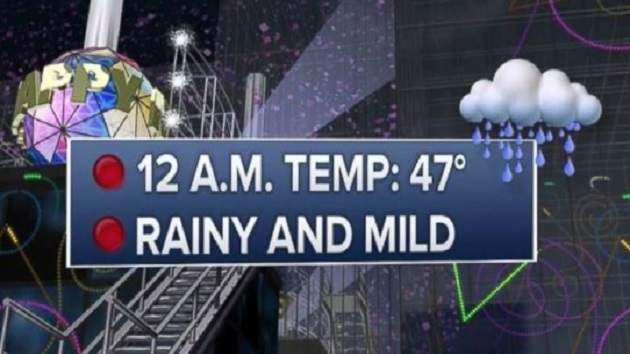 (NEW YORK) — Two storm systems are on the move as revelers get ready to ring in the new year — and those headed to Times Square to see the ball drop should make sure to bring their ponchos.

One storm system is bringing mountain snow and gusty winds to the Northwest and the other is forming over the Gulf Coast. They'll come together to bring a New Year’s storm over the center of the country Sunday night.

Once they merge, rounds of heavy rain will hit from the Midwest to the East Coast. Parts of the upper Midwest will likely see snow and gusty winds.

There's also the potential for severe thunderstorms, packing damaging wind gusts and a couple of tornadoes across portions of Mississippi, Alabama, Tennessee and Kentucky.

When the ball drops in New York City, it will likely be raining, but revelers can at least rejoice with warmer weather.

It's forecast to be about 50 degrees in New York City at midnight — which would be the warmest New Year’s midnight temperature in 14 years.

Last year was a frigid 9 degrees with a wind chill of minus 4 — the second coldest New Year's on record for New York.

The East Coast storm will disappear the morning of New Year’s Day, leaving clear skies and quiet, mild conditions along the I-95 corridor.

But farther west, an arctic blast will hit the Rockies, the Plains and upper Midwest on New Year’s Eve.

Wind chills will be in the teens Monday morning from Flagstaff, Arizona, into the Texas Panhandle.

It will feel like single-digit temperatures in Colorado and Kansas, and wind chills will even dip below zero from the northern Rockies into the Dakotas.

A high wind watch has been posted for some areas as downed trees and power lines and gusts up to 60 mph are possible.

“She didn’t need any more training. She got me.” — Father of Rust armorer speaks out after fatal set shooting
Halle Berry says she burned her Razzie Award: “I set that thing on fire”
Member of ‘Jena Six’ speaks out on race and the justice system 15 years later
Blizzard warning issued for Hawaii with at least 12 inches of snow forecast
Treat yo self! Aziz Ansari reveals engagement during comedy set
‘Hamilton’ stars Anthony Ramos and Jasmine Cephas Jones split after six years together