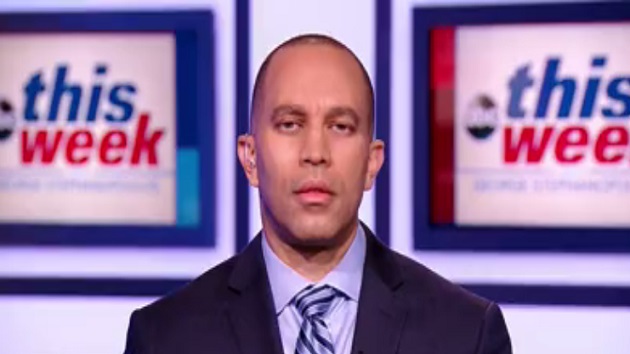 ABC News(WASHINGTON) — A member of the incoming House Democratic leadership called the death of two migrant children in U.S. government custody on the southern border “unacceptable, un-American and unconscionable.”
Rep. Hakeem Jeffries, D-New York, told “This Week” Co-Anchor Martha Raddatz that the Trump administration should be held responsible for the deaths.
“That was unacceptable, un-American and unconscionable, and we need to do better,” Jeffries said of the deaths of two young children in Customs and Border Protection custody this month.
“Do you think the federal government bears any of the blame?” Raddatz asked.
“Well, I think the Trump administration bears blame to the extent that the buck stops at the top. And at the end of the day, you had two young innocent children die in American custody. That should never occur,” Jeffries said.
In a tweet Saturday, Trump blamed Democrats and their policies for the migrants’ deaths.
In a separate interview on “This Week,” U.S. Customs and Border Patrol Commissioner Kevin McAleenan said the migrant deaths were “just absolutely devastating for us on every level” and called the situation at the border a “humanitarian crisis.”
“It’s been over a decade since we’ve had a child die anywhere in our processes,” McAleenan said. “What I can tell you about these two cases — and I’ve looked at our operation reporting, the initial investigative reporting, I looked at the fathers’ statements and interviews — is that our agents did everything they could as soon as these children manifested symptoms of illness to save their lives.”
Jeffries also criticized the Trump administration for its handling of the southern border. He downplayed the likely success of an agreement with Mexico announced by Department of Homeland Security Secretary Kirstjen Nielsen that would make asylum seekers wait in Mexico until their hearings in U.S. courts.
“I'm not sure whether we can believe anything that has been said as it relates to the Trump administration reaching an agreement with the Mexican government,” Jeffries said. “This is the same president who repeatedly promised the American people that Mexico would pay for the wall that he plans to build.”
Trump has pressed for a border wall and increased security at the U.S.-Mexico border, citing incidents like the one that occurred this past week with the killing of a California police officer Ronil Singh, allegedly by an undocumented immigrant.
The sheriff leading the investigation said that Singh would have been alive today if law enforcement could crack down on sanctuary laws. Jeffries said he would reserve judgment on the California sheriff’s assessment given his unfamiliarity with California laws, but called the killing “a human tragedy.”
“Clearly, it’s a human tragedy. Clearly, we have to do better in terms of preventing these type of occurrences from taking place, and to keep our law enforcement safe to keep our communities safe. That’s what Democrats intend to do and will continue to do on a bipartisan fashion,” said Jeffries.
Jeffries also defended the sanctuary laws, citing their ability to potentially encourage undocumented immigrants to come forward to report crimes without fear of deportation.
“My experience in New York has been different, where members of the NYPD — clearly the most professional, highly-trained law enforcement entity in the country, if not the world — has been that these sanctuary laws actually help promote public safety by encouraging cooperation, encouraging communication between community and police in a way that allows the police to better do their job,” Jeffries said.
Copyright © 2018, ABC Radio. All rights reserved.