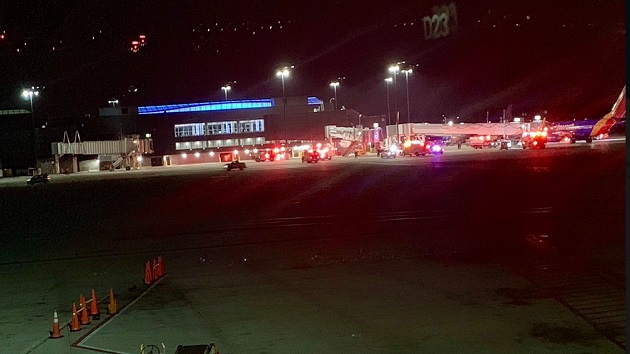 Twitter/@starryeyd_(BALTIMORE, Maryland) — Six people were hospitalized with non-life-threatening injuries after a jet bridge failed at a Baltimore airport, officials say.
Just before 8 p.m. on Saturday, Southwest flight 822 arrived at Baltimore-Washington International Thurgood Marshall Airport (BWI) from the Dominican Republic. Paramedics met the flight to “assess an on board medical situation that occurred in-flight with one passenger,” a Southwest spokesperson said.
“While medical personnel were assisting that passenger outside the aircraft, the airport-owned passenger loading bridge experienced a failure,” the spokesperson said.
"While working to move the passenger from the aircraft, the jet bridge that serves the airline gate failed," a BWI spokesperson said in a statement. "Six individuals were injured in a fall."
Those injured were transported to local hospitals, according to BWI. BWI Fire Chief Victor Ferreira said on Twitter that "personnel involved were taken to area hospitals to be evaluated for minor injuries as a precaution."
The remaining passengers on the flight deplaned using the air stairs, the Southwest spokesperson said.
The jet bridge failure is “under investigation” according to BWI.
No other operations at the airport were affected, BWI said.
Copyright © 2018, ABC Radio. All rights reserved.