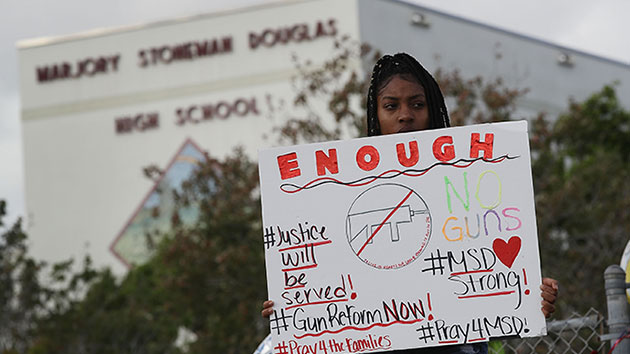 Joe Raedle/Getty Images(PARKLAND, Fla.) — In an investigative report on the mass shooting in Parkland, Florida, earlier this year, a state commission pointed to several security failures at Marjory Stoneman Douglas High School that left students and staff vulnerable.
In the draft report, the Marjory Stoneman Douglas Public Safety Commission highlighted failures such as routinely unlocked doors and gates, which allowed 19-year-old suspect Nikolas Cruz to access the school's campus, as well as a lack of a PA system in the hallway and "exterior areas," which could've been used to warn staff and students.
The draft report, which was initially released in November, also included chilling images of Cruz before and after he allegedly opened fire on students and staff in the school, killing 17.
Video in the Sun-Sentinel shows Cruz entering the east stairwell of the school's building 12 and pulling out an assault rifle as a student walks past him.
Another image shows Cruz, armed with the rifle, stalking the building's hallways.
After the shooting, Cruz was able to slip away from campus by blending in with other students who were trying to escape, police said. He was later apprehended.
On the day of the deadly shooting, a camera captured the school resource officer taking cover instead of confronting the suspect, the report said. There was also an inadequate number of outdoor video cameras, according to the report.
The commission's draft report also said a campus monitor "admitted on video that he recognized the bag Cruz was carrying as a rifle bag" and "identified Cruz as a threat." That same campus monitor also said he had "heard rumors of Cruz hurting animals," according to the report.
"Previous year, the campus monitors had a discussion that if anyone would shoot up the school, it would be Cruz," the report said.
Cruz has been charged with 17 counts of murder. Authorities have yet to release details on why the former Marjory Stoneman student allegedly stormed into the school with an AR-15 and opened fire.
A transcript and video of Cruz's confession to police after the shooting was released in August.
"I want to die. At the end, you are nothing but worthless, dude," he mumbled to himself. "You deserve to die."
The commission plans to release its recommendations to Florida's governor next week.
A judge entered a "not guilty" plea on Cruz's behalf in March.
Copyright © 2018, ABC Radio. All rights reserved.