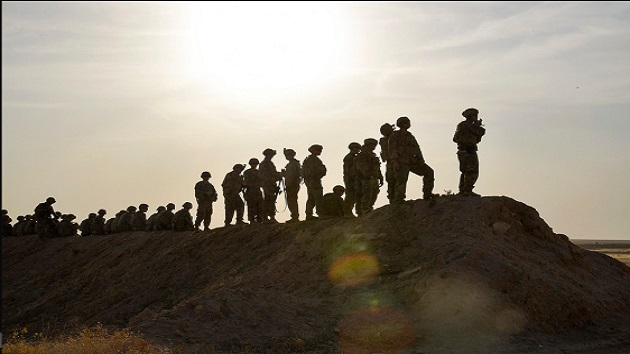 U.S. Army photo by 2nd Lt. Jamie Douglas(MANBIJ, Syria) — The Syrian army is poised to enter a Kurdish-held city in northern Syria for the first time in years, as Turkey threatens to invade the city and the U.S. military plans its withdrawal from the country.
On Friday, Syrian state media announced that the Syrian army had entered the city of Manbij near the Turkish border at the request of Kurdish forces seeking to avoid a Turkish invasion of the area.
The U.S. military presence in Manbij has served as a buffer between Turkey and the Kurds — a group that Turkey considers to be an element of an insurgent group but that the U.S. has partnered with in the fight against ISIS. For months, the city has been the source of tension in the region as Turkey has threatened to invade it.
In a tweet, the U.S.-led coalition against ISIS cautioned that it had seen "no indication" in a change to military forces in the city and called on all parties to "respect the integrity of Manbij and the safety of its citizens."
But the deployment of Syrian troops was welcomed by the Kurds, whose spokesperson, Qased Jihan, said in a statement that they expect the Syrian army to control much of eastern Syria after the U.S. pulls its 2,000 troops out of the country.
The withdrawal of U.S. troops could take months, according to U.S. officials, who stressed to ABC News that no final decisions have been made about the planned pace of the withdrawal.
Shortly after President Trump's announcement of the withdrawal last Wednesday, U.S. officials had said it was likely that all troops could be pulled out in 30 days. But officials say that as plans have been developed over the last week, the pace of withdrawal could be much slower. Some of those U.S. troops are in and around Manbij.
At one point in November, Kurdish fighters abandoned the fight against ISIS and headed west to Manbij to defend the city from Turkey, causing the coalition to suspend offensive operations against the terrorist group for a short time.
Turkish threats led the U.S. and Turkey to agree to conduct combined joint patrols outside the city, which finally began in early November. And earlier this month, the U.S. military established observation posts in northeast Syria to further address Turkey's security concerns about the Kurds.
The combined joint patrols and observation posts were seen as a way to decrease tensions, as well as a sign of increased cooperation between the U.S. and its NATO ally.

Future of drone delivery may be happening in this small Irish town
Erin Brockovich: the real story of the town three decades later
Prosecutor reviews case of Army officer who was hit with pepper spray during traffic stop
Zack Snyder’s ‘Army of the Dead’ becoming one of Netflix’s most-watched films ever
Republicans poised to block creation of Jan. 6 commission
Republicans poised to quash creation of Jan. 6 commission