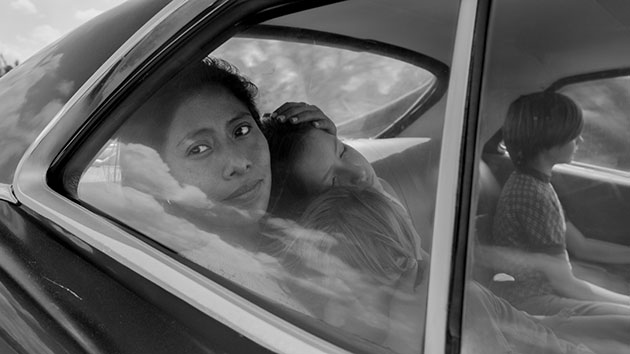 Image from "Roma"; Alfonso Cuarón/Netflix(NEW YORK) — The end of the year is the best time to catch up on your movie watching. But so you don't have to waste your time with disappointing choices, film critic Peter Travers has screened more than 300 movies this year to compile his list of the very best, and worst, movies of 2018 for his annual special edition of Popcorn with Peter Travers.

Let's start with the worst:

6. Venom
Tom Hardy stars as journalist Eddie Brock, who gains superpowers after being infected by an alien whose species is on a mission to invade Earth.

“This was a guy that bit the heads off of people. He was just the most vicious, dark, anti-hero out of the whole comic universe," Travers says of Venom's anti-hero. "And they made a movie that’s just sickeningly sweet. Everybody was ingratiating. Everybody was just nice. Nobody wanted a Venom who was nice. I know it was successful. You people that paid money to see it, you were wrong.”

“I sit here as a person that saw all three of these Fifty Shades movies. And believe me, I want to sink in my seat from the hell of this torture,” says Travers, calling the films "the most sanitized version of S&M in movie history. I’ve never seen anybody more uncomfortable in the act of sex than these two actors.”

4. Robin Hood
By now we all know the story of Robin Hood, the hardened English crusader who steals from the rich and gives to the poor. Taron Egerton and Jamie Foxx star in this latest adaptation of the age-old story.

Says Travers: “We’ve seen "Robin Hood" so many times and there was no need to make it again. And this “Robin Hood” proves it.” He adds, “they’re doing things to say look how cool and contemporary we are. And you know what Robin Hood people? You weren’t cool. You weren’t contemporary. You were just dull. Dull, dull, dull.”

3. Jurassic World: Fallen Kingdom
It’s been three years since the destruction of Jurassic World and this time, Chris Pratt's Owen Grady and former Jurassic World exec Claire Dearing, again played by (Bryce Dallas Howard, return to the island to save the remaining dinosaurs from a volcano, where they make a startling discovery.

Travers call Jurassic World: Fallen Kingdom "a cash grab. I know Hollywood is about the business of making money. But we’re all here, willing to suspend disbelief and have a good time. And you give us this which is without a single second of inspiration."

“This is the most misbegotten biopic probably in movie history,” says Travers of the film. “It wasn’t scary. It wasn’t informative. It wasn’t anything. It was just bad.”

1. The Happytime Murders
This raunchy comedy-slash-crime drama starring Melissa McCarthy takes place in a world where puppets and humans coexist.

“How could this have happened?” asks Travers. “There’s not a single reason for this movie to exist. It has talented people and trashes them for everything we love them for. What better pick for the worst movie? And what better movie for you to ignore for the rest of your movie-going lives.”

And here are Peter's picks for the best films of 2018:

6. Green Book
Inspired by a true story, Viggo Mortensen plays chauffeur and body man to classical musician Mahershala Ali in the Deep South during the time of racial segregation, where the Green Book told visiting African-Americans where they could find good, lodging and other services without being harassed.

Says Travers: “The comic teamwork of Mahershala Ali and Viggo Mortensen is just perfection. This belongs on any list of the best.”

5. BlackKklansman
In Spike Lee’s latest, also based on a true story, an African-American detective in the 1970s works with a white colleague to infiltrate and expose the Ku Klux Klan.

“Spike Lee has fun with it, but he also has fury with it," says Travers. "It’s the kind of movie you see that makes you feel exhilarated because the filmmaking is just so terrific."

4. The Favourite
Set at the court of Britain's Queen Anne in the early 18th century, Emma Stone and Rachel Weisz play rival ladies in waiting the monarch, played by Olivia Coleman.

“This is like no costume drama you have ever seen," says Travers. "These are incredible performances. The movie is raunchy. It’s sexual. It’s satirical. It’s about power. But it’s about women taking power. And what could be more topical this year than that?”

3. Black Panther
After the death of his father, Prince T'Challa, played by Chadwick Boseman, returns home to the African nation of Wakanda to take his rightful place as king. But he's soon drawn into a conflict that puts the fate of his kingdom and the world at risk.

“Here we see black history and we see children that can watch a comic book superhero movie that they can identify with, any child of color can look up and say, 'I’ve waited all my life to see a movie like this'. “Black Panther” to me is the best Marvel movie ever made,” says Travers.

2. A Star Is Born
In this third remake of the classic film, starring Lady Gaga and Bradley Cooper, the latter of whom also makes his directorial debut, a seasoned musician discovers and falls in love with a struggling artist. He nudges her into the spotlight and changes her life while his own spirals downward.

Travers calls A Star Is Born "an old fashioned movie done with a new fashioned touch, done with a new director named Bradley Cooper who just surprises us all. And Lady Gaga, everything you did in this movie was exactly right.”

Says Travers of his top pick: “It crosses every border of language and says here’s my story. Here’s your story. It’s the movie this year that made me cry the most, that made me laugh the most and that made me think, movies can do anything. And “Roma” proves it."