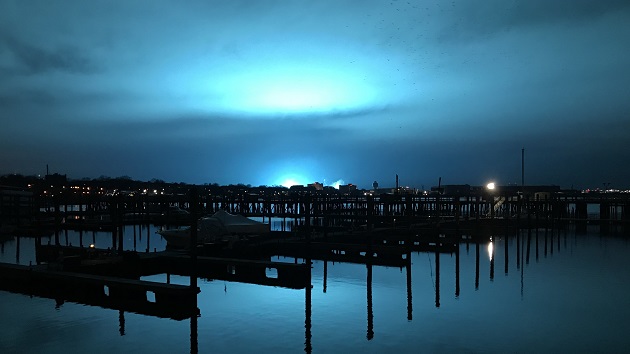 Simin Liu/Anadolu Agency/Getty Images(NEW YORK) — A transformer explosion lit up the night sky in New York City on Thursday, turning the skyline bright blue for a moment and frightening residents in the process.
The fire broke out at a Con Edison plant in Queens at around 9 p.m. and was under control within the hour, police said. There are no injuries reported.
"The lights you have seen throughout the city appear to have been from a transformer explosion at a Con Ed facility in Queens," the New York Police Department (NYPD) announced in a Twitter post.
A subsequent NYPD tweet confirmed that the "incident in #Astoria was result of transformer explosion. No injuries, no fire, no evidence of extraterrestrial activity."
Con Edison blamed the massive flash on a "brief electrical fire" at one of its substations in Astoria, just 5 miles northeast of the Empire State Building. The power supplier said it is evaluating power outages in surrounding areas and investigating the cause of the fire.
"There was a brief electrical fire at our substation on 20th Avenue & 32nd Street in Astoria shortly after 9 p.m. this evening, which involved some electrical transformers and caused a transmission dip in the area," the company said in a tweet. "Con Edison has been in contact with officials at LaGuardia Airport, which switched to backup generation at the time of the transmission disturbance."
Nearby LaGuardia Airport grounded all flights for about 30 minutes in order to do an airport inspection, according to the FAA. An air traffic control tower at the airport was running on a generator as of late Thursday night and some terminals were without power, according to local and airline officials.
"Due to a power outage in Queens, there is partial flight operations @LGAairport," airport officials said in a tweet. "Many flights are departing, some are not. Please check flight status with carrier."
New York Governor Andrew Cuomo said crews were working to fully restore power "as soon as possible," but he did not offer a timeline.
"There are no active fires and no significant loss of power except to LaGuardia Airport, where crews are working to restore full power to the airport as soon as possible," Cuomo said in a statement.
The blue flash could be seen from as far as Manhattan — across the East River from the airport — and some residents said it appeared to be daytime for a moment, according to multiple social media posts.
Copyright © 2018, ABC Radio. All rights reserved.