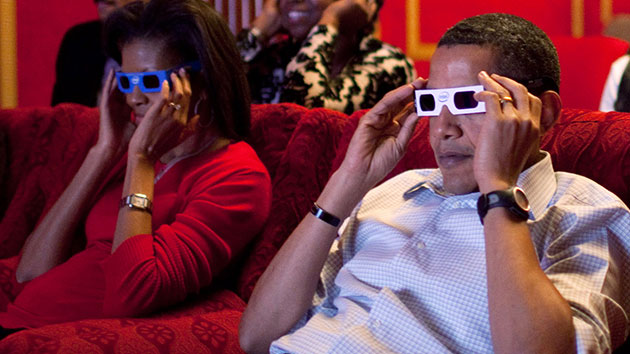 Barack and Michelle Obama at the White House theater in 2009; Pete Souza/White House via Getty Images
Posted on December 28, 2018 by ABC News

Barack and Michelle Obama at the White House theater in 2009; Pete Souza/White House via Getty Images(NEW YORK) — Barack Obama’s apparently spent a lot of time in movie theaters this year — or at least, watching flicks at home. The former president's list of his favorite films of 2018 includes Black Panther, BlacKkKlansman, and If Beale Street Could Talk.

“As 2018 draws to a close, I’m continuing a favorite tradition of mine and sharing my year-end lists,” Obama commented. “It gives me a moment to pause and reflect on the year through the books, movies, and music that I found most thought-provoking, inspiring, or just plain loved. It also gives me a chance to highlight talented authors, artists, and storytellers — some who are household names and others who you may not have heard of before."

Obama also revealed his favorite songs and books of the year. It is no surprise that the first book on his list is his wife Michelle Obama's recent memoir, Becoming, which he noted is “obviously my favorite!“