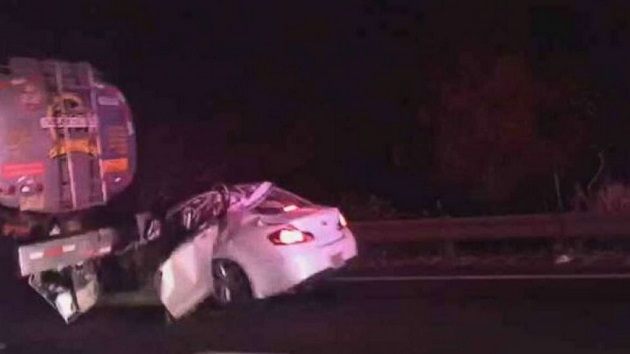 WABC(LAKEWOOD, N.J.) — A U.S. Marine was among four young men killed when a sedan they were in plowed into the back of a tanker truck in New Jersey early Wednesday, authorities said.
The crash on the Garden State Parkway killed U.S. Marine Corps Lance Cpl. Robert Ordenana, 23, of Lakewood, New Jersey, officials said.
Also killed in the crash were Kevin Quisepe-Prieto, 21, his brother, Jimmy Quisepe-Prieto, 23, and Victor Lugo, 24, according to the New Jersey State Police.
All four men were pronounced dead on the scene in Dover Township, police said.
Kevin Quispe-Prieto, 21, was driving when he slammed into the back of the oil tanker truck on the Garden State Parkway about 2:50 a.m., State Police said.
Photos from the scene showed the roof of the car sheared off as it ran into the back of the tanker.
The driver of the tanker truck, whose name was not released, suffered non-life-threatening injuries, police said.
The cause of the crash is under investigation, police said.
Ordenana was a rifleman who served in the U.S. Marines for nearly four years, according to ABC Philadelphia station WPVI-TV.
Lugo worked with Lakewood's Department of Public Works since 2013 but wanted to become a police officer like his stepfather, Patrolman Alex Guzman, according to WPVI.
Police said the men killed were in an Infiniti G37 sedan headed south on the Garden State Parkway when the vehicle hit the oil tanker that was either stopped or moving slowly in the right-hand lane.
The collision left the car wedged under the rear of the tanker truck, police said.