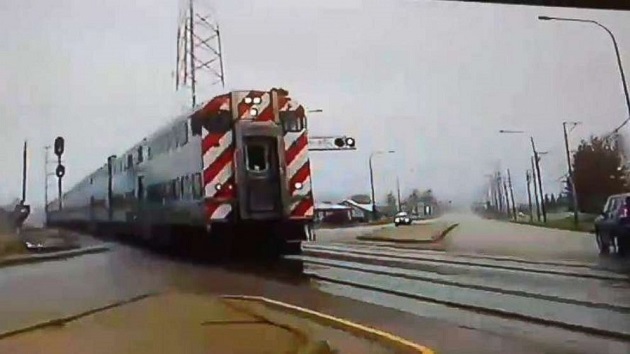 Mokena Police Department(MOKENA, Ill.) — Police officer Peter Staglewicz narrowly avoided tragedy last month when he swerved off the road just a few feet from being slammed into by a speeding commuter train.
Staglewicz, who works for the police department in Mokena, Illinois, was driving toward the train crossing when heart-stopping video from his dash camera showed him swerve left into a traffic island just to avoid likely tragedy.
The video was posted on Staglewicz's Facebook page last Friday, though it happened in November. The clip had garnered more than 640,000 views on his page in six days.
In the video, Staglewicz can be seen driving up to the tracks with the crossing gate still raised. The lights start flashing, and the gate drops only seconds before the train blows through the intersection.
Metra, which operates commuter trains in the Chicago area, blamed the near-miss on a mechanical issue. It was remedied a few hours later, Metra told Chicago ABC station WLS-TV.
"Throughout my life, I've had very little luck," Staglewicz wrote on Facebook. "I've bought tons of raffle tickets, from Little League tickets to charity raffles. Every lottery ticket was a loser. I just thought I wasn't born with luck at all. Little did I know, I had luck. I was just saving it all up for the perfect time."
Another car just managed to safely make it through the intersection ahead of Staglewicz's cruiser.
Two Chicago police officers were killed when they were struck by a train earlier this month, though that incident actually took place after Staglewicz's close call.
Eduardo Marmolejo, 36, and Conrad Gary, 31, both died at the scene while they were pursuing a suspect involved in a shooting. Authorities believe a train heading in the opposite direction may have masked the sound of the one that struck the officers.
Copyright © 2018, ABC Radio. All rights reserved.