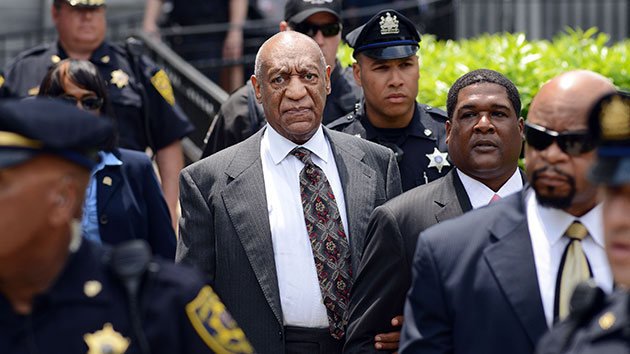 Every year has its share of old-fashioned, off-line scandals — like when years-old sex crime accusations against formerly beloved TV dad Bill Cosby ended with his September sentence of 10 years in prison. But 2018 saw major stars like Roseanne Barr, Marvel Studios director James Gunn, and Kevin Hart do serious damage to their careers in 140 characters or less.

Bill Cosby
April 21, Bill Cosby was found guilty on all three felony counts of aggravated indecent assault in his retrial on charges he had a non-consensual sexual encounter in 2004 with Andrea Constand, the former director of operations for the women’s basketball team at Temple University, where for years Cosby was a trustee and major financial donor. A jury of seven men and five women in Norristown, Pennsylvania delivered the verdict during their second day of deliberations following a two-week trial. Of dozens of women who have come forward in recent years to accuse the entertainer of similar assaults stretching back to the 1960s, only Constand’s allegations fell within the statute of limitations. September 25, 81-year-old Cosby was sentenced to three to ten years in prison, which he's currently serving in Pennsylvania while his attorneys work on his appeal.

Logan Paul
2018 began with YouTube superstar Logan Paul already under the gun, thanks to a video he posted Dec. 31, 2017. In a vlog, Paul visited Aokigahara, Japan's so-called "suicide forest," where he came across a lifeless, hanging body. Paul made light of the situation — which he later blamed on shock — and was flamed online from those who had attempted suicide or had lost family members to it. He apologized, took a hiatus from posting, and later returned with stories of those who had experienced suicide in their lives. He also apologized to Good Morning America's Michael Strahan for his terrible "lapse in judgment." Paul also put his money where his mouth is, by pledging a million of his own dollars to suicide prevention and mental health awareness.
Heather Locklear
Former Melrose Place star Heather Locklear had multiple run-ins with the law in 2018. In February, a drunken scrap with her boyfriend, Chris Heisser, resulted in her arrest for domestic violence and assaulting police officers. She was also arrested in June for allegedly battering an officer who was trying to separate her from her family, with whom she was fighting. She allegedly also kicked an EMT in the chest; the first responder was trying to medically clear the actress before she could be taken to jail. Neither the cop nor the EMT was injured, but Locklear was charged with one count of interfering with an officer and two counts of battery against an officer and EMT. That month, she was also hospitalized for a psychological evaluation when her family thought she was suicidal.
Kylie's baby surprise
Kylie Jenner and her boyfriend, Travis Scott, welcomed a baby named Stormi Webster on February 1, 2018. While that's biology and not necessarily a scandal, the reality starlet somehow hid the pregnancy from her fans and the ever-present paparazzi until the birth. Kylie posted a birth announcement to Instagram, and a behind-the-scenes video of the pregnancy that includes intimate moments between her and Scott, 25, along with scenes from her doctor's visits and her baby shower, and of the baby being born.

The Rise and Fall of Roseanne and Roseanne
On March 27, Roseanne Barr was on top of the world: The reboot of her show Roseanne had a smash debut, with record millions of people tuning in to see her fictional Conner family's return to TV for the first time since 1997. She even got a congratulatory call from President Trump, whom both she and her character supported. However, not even two months later, it was all over after Barr posted a tweet in May in which she said Obama White House advisor Valerie Jarrett, who's black, is what you get when "Muslim brotherhood & planet of the apes had a baby."

Despite apologizing afterward, within days ABC Entertainment president Channing Dungey terminated the star. Barr insisted that she thought Jarrett was white and blamed her tweet on Ambien. Even the maker of the sleep aid weighed in, insisting "racism is not a side effect."

Barr apologized several times, first tearfully on the podcast of Rabbi Shmuley Boteach, then on YouTube, and later on Fox News' Hannity show. To Sean Hannity, a contrite Barr summed it up plainly: "I made a mistake and I lost everything."

To keep nearly 200 members of cast and crew employed, Barr agreed to sign over her rights for a re-launched reboot called The Conners, which debuted in October. The series' focus shifted to the rest of the family after Barr's character died of an off-screen opioid overdose.
Before the launch of The Conners, Barr's onscreen husband John Goodman said he "couldn't thank her enough" for allowing the show to carry on; in an interview with the Sunday Times in August, Goodman admitted being "brokenhearted" about the situation, and added of Barr, "I know for a fact that she's not a racist." The comment earned praise from Barr, who commented, "I thank John Goodman for speaking truth about me, despite facing certain peril from producers and network."

The Conners' ratings were much lower than those of the original reboot. Moments after the first episode aired, Barr defiantly tweeted, "I AIN'T DEAD, BI*****!"

Despite rumors The Conners would be cancelled, its numbers were promising enough for ABC to announce in November that new episodes will be ordered for 2019.

Deadpool's TJ Miller arrested by the FBI
In April 10, Deadpool series and Silicon Valley actor T.J. Miller was arrested by the FBI for allegedly making false bomb threat on Amtrak train. The situation, apparently payback from an allegedly intoxicated Miller to a woman he'd been talking to but who spurned his advances, led to the wrong train being stopped, cleared and searched. Miller had already parted ways with Silicon Valley over allegations of bad behavior on set, but he was also fired from a long-running commercial gig, though he still appeared as Weasel in the hit Deadpool 2. There are no plans for him to reprise his character in an upcoming Deadpool project, however.

Tristan Thompson's cheating scandal
On April 12, Khloe Kardashian and her NBA player boyfriend, Tristan Thompson, welcomed their baby, True Thompson — but the happy occasion was overshadowed by headlines just two days prior. Both TMZ and The Daily Mail published video and photos that appeared to show Thompson kissing other women. Not surprisingly, the cheating scandal ended up on Keeping Up with the Kardashians, on which Kim claimed the family was "in shock," adding, "We all loved Tristan…We thought [Khloe] found her Prince Charming."

Smallville star Allison Mack arrested for sex trafficking
On April 20, Allison Mack, the actress best known for playing a young Superman's best friend on Smallville, was charged with sex trafficking for her alleged role in that controversial supposed self-help group called NEXIUM. Mack was indicted for allegedly helping to recruit women as alleged sex slaves for a secret sorority within the organization based out of Albany, New York.
Twitter ends James Gunn's Marvel movie career
On July 20, in a shock for fans of the Guardians of the Galaxy franchise, Marvel Studios and and ABC News' parent company Disney fired writer/director James Gunn, who made household names out of the obscure comic book heroes, and hundreds of millions of dollars for Disney. Gunn was working on the third movie in the hit Guardians franchise, when, in what would become a recurring theme in 2018, older tweets did him in. The filmmaker's fate was sealed when offensive tweets he sent years ago — some making light of AIDS, rape, and pedophilia — came to light. Despite Gunn acknowledging the inappropriateness of the tweets, even a social media campaign from fans and a unified message from the Guardians of the Galaxy cast regulars couldn't save his job.

Louis CK returns to the stage
In August, there was social media blowback after Louis CK took the stage, unannounced, at a comedy club in New York City to perform a 15-minute set. It was the controversial comedian's first stand up routine since his career crashed and burned in late 2017 when he admitted to exposing himself and masturbating in front of female comedians. Noam Dwarman, the owner of the Comedy Cellar, says Louis CK got a standing ovation — but the owner also got some complaints from patrons who said they never would have gone had they known CK would be there.

Kevin Hart loses Oscars gig (again, thanks to Twitter)
On December 4, Kevin Hart happily announced that he'd be the host of 2019's Academy Awards telecast. But two days after he touted "the opportunity of a lifetime," Hart quit over backlash over homophobic tweets from years ago. "I have made the choice to step down from hosting this year's Oscar's [sic]," Hart wrote on Instagram. "…this is because I do not want to be a distraction on a night that should be celebrated by so many amazing talented artists. I sincerely apologize to the LGBTQ community for my insensitive words from my past."

Hart explained on Instagram that he chose to pass on the Motion Picture Academy's invitation to remain as host if he apologized. "The reason why I passed is because I've addressed this [controversy] several times," Hart said. "I've said who I am now versus who I was then. I've done it. I've moved on. I'm in a completely different space in my life…"

Hart's decision left the Academy of Motion Picture Arts and Sciences scrambling to find a replacement for what is considered by many to be a thankless job: The host is inevitably blamed for the telecast's bloated run-time and dwindling ratings.

The Academy is even said to be considering a show without a host. For her part, Oscar winner and past telecast host Whoopi Goldberg said she'd be willing to step up as host once again. "If you want to go host-less, that's your prerogative," The View co-host said, adding, "I think it's a dumb idea."

However, she allowed she, "may not be anybody's first choice…Half of the country is really mad at me, the other half is OK until tomorrow, and then they're pi**** at me!"