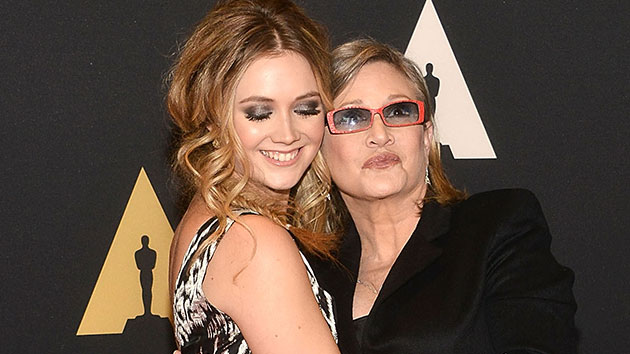 Araya Diaz/WireImage(NEW YORK) — Hard to believe perhaps, but it's been two years since we lost Carrie Fisher. And Fisher's daughter, actress Billie Lourd, marked the anniversary with a sweet, musical post on Instagram to honor her late mother and Star Wars icon.

"It has been two years since my Momby’s death and I still don’t know what the 'right' thing to do on a death anniversary is (I’m sure a lot of you feel the same way about your loved ones)," Lourd wrote in the caption to the video post. "So I decided to do something a little vulnerable for me, but something we both loved to do together – sing."

In the video, Lourd sits at a piano and sings the Jackson Browne composition "These Days."

"I’ve found that what keeps me moving is doing things that make me happy, working hard on the things that I’m passionate about and surrounding myself with people I love and making them smile," she also writes. "As my Momby once said, 'take your broken heart and turn it into art' – whatever that art may be for you."

Fisher died December 27, 2016 at age 60, days after suffering a cardiac arrest while aboard a flight from London to Los Angeles. Debbie Reynolds, Fisher's mother and Lourd's grandmother, died the very next day at age 84.

It's the second time in two weeks that Lourd has posted about her mother. At the time of Penny Marshall's death last week, she also shared a vintage image of her mom and the famed director.

Crude oil climbs to highest price in nearly three years, pushing up gas prices
Man shot to death during car sale in possible robbery attempt: Officials
‘Disconcerting’ rise in road rage shootings resulting in death or injury, data shows
Toddler falls from window of home, mauled to death by family’s 2 pit bulls when he lands
Darnella Frazier, who recorded video of George Floyd’s death, recognized by Pulitzer board
“It’s not the years, it’s the mileage”: ‘Raiders of the Lost Ark’ turns 40 on Saturday