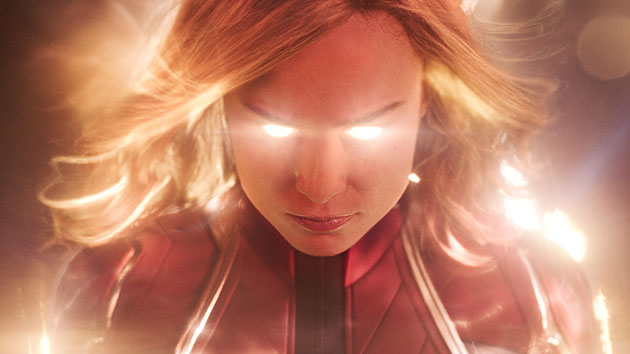 Brie Larson as "Captain Marvel": Marvel Studios/Disney(NEW YORK) — It could be the point of no return for women in Hollywood in 2019, not only in front of the camera, but more importantly behind it as well. Here's a look at female-led films you should have on your radar for next year.

Captain Marvel
Aside from Avengers: Endgame, the biggest superhero movie of the year will likely be Brie Larson's turn as the incomparable Captain Marvel in Marvel's first female-led film. The character's also a big player in Endgame, which comes out April 26, seven weeks after Larson's film debuts on March 8. Marvel is owned by Disney, parent company of ABC News.

Miss Bala
Another film that'll feature a woman kicking just as much butt as the men is Miss Bala, which comes out on Feb. 1. Gina Rodriguez stars as a woman who's kidnapped in Mexico and forced to do heinous deeds for a drug cartel. The Jane the Virgin star takes action to save herself and her friends.

The Rhythm Section
A few weeks after Miss Bala comes A Simple Favor star Blake Lively in The Rhythm Section, debuting Feb. 22, about a woman after revenge on those responsible for her family's death.

The Kitchen
What do you get when you combine Tiffany Haddish, Melissa McCarthy and Elisabeth Moss with Straight Outta Compton co-writer Andrea Berloff? You get The Kitchen, about the wives of crime lords in 1970s New York City who take over the business after their husbands are locked up. Look for it September 20.

Also on the way in 2019: Amy Poehler steps behind the camera to direct Wine Country, starring herself, Maya Rudolph and bed bud Tina Fey. And January 25, we've got Late Night, written by Mindy Kaling and starring Emmy Thompson as the host of a long running late night show, doing what she can to keep her grasp on fame.