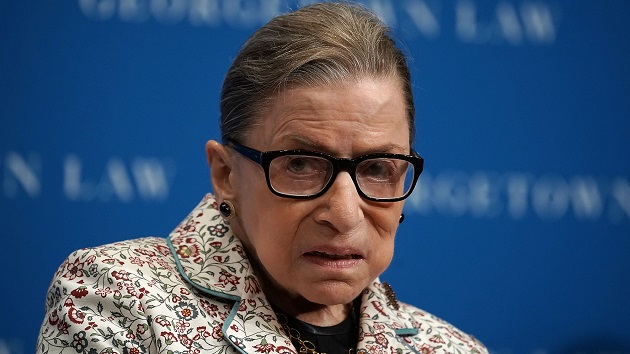 Alex Wong/Getty Images(NEW YORK) — Less than a week after having a pair of cancerous nodules removed from her lung, Supreme Court Justice Ruth Bader Ginsburg has been discharged from the Manhattan hospital where she was treated and is “recuperating at home,” according to a court spokeswoman.
Ginsburg underwent a pulmonary lobectomy on Friday at Memorial Sloan Kettering Cancer Center in New York, where she spent the long weekend before her discharge on Christmas, the court said.
At 85, Ginsburg is the high court’s eldest sitting justice. She just recently resumed a public schedule after being hospitalized for observation and treatment after fracturing three ribs following a fall in her office on Nov. 7.
The two malignant nodules were discovered on her left lung "incidentally" during tests performed after she fractured her ribs in November.
Copyright © 2018, ABC Radio. All rights reserved.