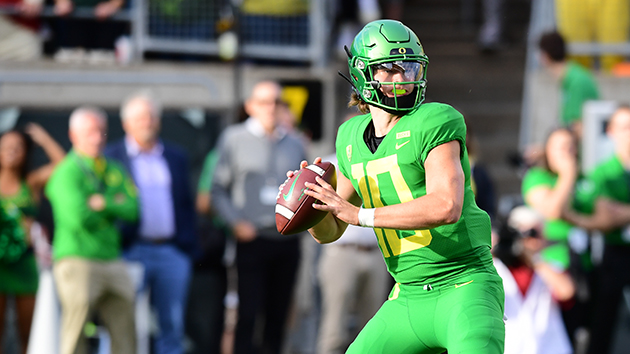 Photo by Scott Clarke / ESPN Images(EUGENE, Ore.) — University of Oregon quarterback Justin Herbert announced on Wednesday that he will return to school for his senior year.
Herbert was considered a likely first round NFL Draft pick. Some experts listed him as the top quarterback in the draft class.
"The University of Oregon has been a special place to me for as long as I can remember," Herbert wrote. He said he wanted to announce his intent to return to school now, to "ensure that there are no distractions" ahead of the team's bowl game.
Oregon (8-4) is set to play Michigan State (7-5) in the Redbox Bowl on New Year's Eve.
Herbert passed for nearly 3,000 yards and 28 touchdowns this season. He will get the chance to play with his brother next season. Patrick Herbert, a tight-end prospect, signed his National Letter of Intent to play for Oregon in May.
Copyright © 2018, ABC Radio. All rights reserved.