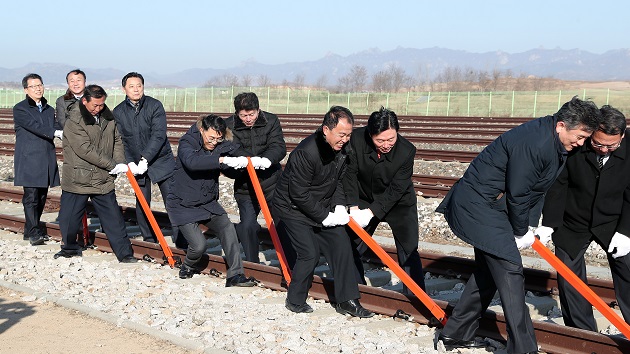 Korea Pool/Getty Images(KAESONG, North Korea) — The two Koreas held a symbolic groundbreaking ceremony in Kaesong, North Korea, on Wednesday to link the countries’ railroads across the border and modernize North Korea’s decades-old railway system.
A delegation of 100 South Korean government officials, lawmakers and senior citizens separated from their families during the Korean War traveled across the border by train.
North Korea’s head of the Committee for Unification, Ri Son Gwon, was joined by officials from China and Russia to witness the event, which included signing a wooden railroad tie and unveiling a new signboard that read “Seoul-Pyongyang.”
“We plan to hold detailed negotiations with the North to coordinate on the specific levels we want to achieve in the modernization of railways and roads, and how to carry out the project,” said Eugene Lee, the ministry’s spokeswoman.
But analysts in Seoul are skeptical, saying this ambitious project would remain more of a “show,” at least while negotiation between Pyongyang and Washington to denuclearize North Korea in exchange for economic assistance is at a standstill.
“I would say this ceremony is a ‘useful lie,’” Andrei Lankov, a Russian scholar who teaches North Korean studies at Kookmin University, told ABC News.
“Seoul and Pyongyang are carefully playing the game of pretending to be at good relations so that American hardliners would not jump in and interfere, possibly through military measures,” said Lankov, putting down the ceremony as “only a railway dream that will not happen.”
South Korean President Moon Jae-in and North Korean leader Kim Jong Un agreed during the first inter-Korean summit in April to work together to link the railways, which would inevitably involve modernizing the North’s railway system. Both Koreas agreed on a groundbreaking ceremony within the year at a September summit in Pyongyang.
A joint survey followed to inspect the current conditions in the North and also to draw up what needs to be done. Officials have yet to announce details for the project, but many analysts believe it will cost billions of dollars. And questions on who will actually pay for it remains a huge roadblock.
Choi Kang, vice president of the Asan Institute for Policy Studies in South Korea, said that since there is "no way" North Korea could do pay for the reconstruction alone, they "may have their own expectations on South Korea."
"But that does no way mean they are willing to give up their nuclear weapons in exchange,” Kang said.
Still, Seoul is desperate to keep up the momentum. And the ceremony, although symbolic, is the least that could be done to keep Pyongyang in the game.
“South Korea is in a different position. Whereas the United States chooses to slap sanctions on North Korea for complete denuclearization, South Korea’s strategy is to gradually push for denuclearization by offering multiple carrots for motivation while keeping good relations with the North,” Park Hyung-joong, head researcher of North Korea policy department at Korea Institute of National Unification, told ABC News.
Such differences between Seoul and Washington are gradually narrowing down through a U.S.-ROK working group that started to discuss details last month. The ball remains in the United States’ court while the two Koreas are quietly agitated by the slow pace of the nuclear negotiations.
“Negotiation is at a standstill only because the U.S. did not clarify what would be exchanged for North Korea’s willingness to destroy the Yongbyon nuclear plant,” Cheong Seong-jang, vice president of research planning at Seoul-based Sejong Institute, told ABC News. “That announcement to partially destroy, list and inspect nuclear weapons was a major decision by Kim Jong Un, but it seems the U.S. is still not ready to negotiate.”

Harris, under GOP pressure to visit border, headed to El Paso on Friday
Crisis at the border: How it happened and what is being done
Biden-Putin summit live updates: Leaders hold news conferences after talks end early
Biden to hold July 4 celebration he once hoped would mark ‘independence’ from COVID
Members of Congress hold moment of silence for Americans who died of COVID-19
Police did not clear Lafayette Park area so Trump could hold ‘Bible’ photo op: Watchdog