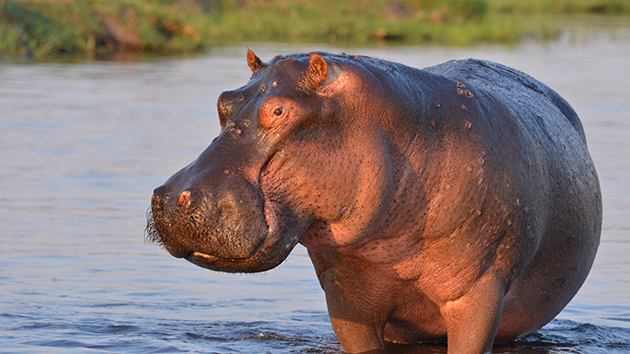 andyKRAKOVSKI/iStock(CINCINNATI) — Most people are upset about gaining a few pounds over the holidays, but not Fiona the hippo.
The baby hippo, who was born prematurely and has gone on to become an internet star of sorts in her first two years, hit a milestone on Wednesday.
The Cincinnati Zoo reported that their most famous resident weighed in at 1,000 pounds.
In a tweet that includes video of the voluptuous semi-aquatic mammal getting on the zoo's rather large scale, they note that the achievement is a landmark event.
"That's a long way from the 29 pounds she weighed when she was born six weeks premature on January 24, 2017!" the Zoo wrote in a tweet.
"Her #NewYearsReZOOlution: to keep growing!"
That resolution should be no problem, as adult female hippos tend to reach about 3,000 pounds.
Fiona has been making headlines since her birth as she was the first Nile hippo born in the Cincinnati Zoo in 75 years.
There were concerns during her early labor, and her initial weight of 29 pounds sparked concerns since a typical newborn hippo weighs between 55 and 120 pounds.
"We did not anticipate that the calf would survive," Christina Gorsuch, director of mammals at the zoo, told Nightline in January 2018, ahead of Fiona's first birthday.
The zoo regularly updates Fiona's followers on their Facebook page — including a page dedicated to her eponymous show. On Christmas, they posted a photo of Fiona and her mother, Bibi, swimming while Fiona appeared posed up next to a Santa hat.
No word yet as to how the social media darling will celebrate her second birthday next month, but if last year is any indication, she indulged with a cake and some pineapples, which her mother helped dig into as well.
Copyright © 2018, ABC Radio. All rights reserved.

Obama hits campaign trail ahead of gubernatorial elections in Virginia, New Jersey
#CarrieOnForever: Mark Hamill, Billie Lourd remember Carrie Fisher on what would have been her 65th birthday
See Tom Holland flying high with Mark Wahlberg in the trailer for the video game adaptation ‘Uncharted’
Rebel Wilson acknowledges people are “obsessed” with her recent weight loss
CDC releases 2021 holiday guidance to prevent spread of COVID-19
Holiday travel may be more chaotic than ever this year, transportation experts say