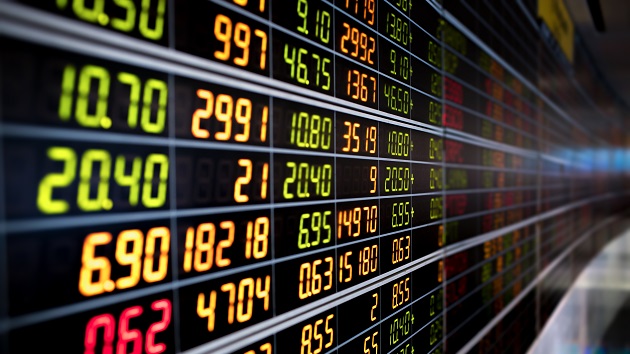 iStock(NEW YORK) — The Dow Jones Industrial Average opened higher on Wednesday morning, the first trading session after the worst Christmas Eve trading session in U.S. history.
The index traded as much as 245 points higher at 22,037, an increase of 1.1 percent after Monday's abbreviated session, before giving up those gains. After the open, trade flattened to about even with Monday's close, or 0.9 percent higher at 21,812.
The markets were closed on Tuesday because of the Christmas holiday. The market tends to make more dramatic moves on holidays because volume is lower. Traders are on vacation and there are fewer trades in general, so each move can be more dramatic than on a normal day.
Market watchers said investors were initially buying on the dip, or taking advantage of lower or cheaper stock prices, pushing the market up.
However, the NASDAQ — which is already in bear territory, or down 20 percent off the year's high — failed to rally. The tech-heavy index traded 4.4 percent lower at 6,242 points in early trade.
The S&P 500, which also touched bear territory on Monday, traded a bit higher, in tandem with the Dow. The index of 500 large companies traded 1.3 percent higher at 2,381.
However, the trading session follows a generally poor December for stocks. Last week was the worst week for the Dow since the Great Recession. On Monday, the Dow had lost 10 percent in value over just a week ago.
The markets were rattled by an unprompted announcement by Treasury Secretary Steven Mnuchin over the weekend that the U.S. banking system was solid. The overall U.S. economy is still strong, despite an ongoing trade war President Trump is waging with China and worries about a government shutdown.
While on vacation in Cabo San Lucas, Mexico, Mnuchin tweeted that he called the CEOs of J.P. Morgan Chase, Bank of America, Goldman Sachs, Morgan Stanley, Wells Fargo and Citigroup. His agency is one of the federal departments affected by the current government shutdown.
The bank executives assured the Mnuchin that “they have ample liquidity available for lending to consumer, business markets and all other market operations," he wrote.
However, because there were no prior concerns about the banks, investors panicked.
Copyright © 2018, ABC Radio. All rights reserved.