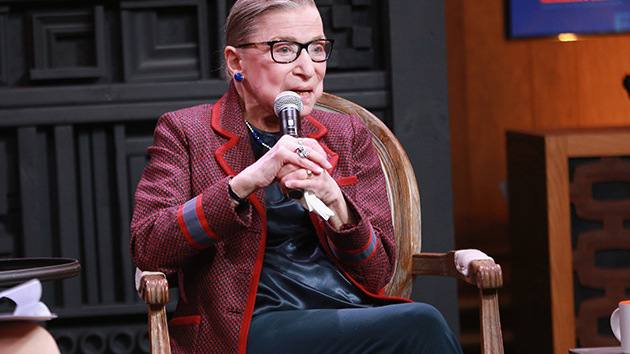 Robin Marchant/Getty Images(NEW YORK) — The Ruth Bader Ginsburg biopic "On The Basis of Sex," couldn’t be more timely to close out a year in which women courageously raised their voices against injustice, inequality and harassment.
The film is about the 85-year-old renowned Supreme Court justice and how she cemented her status as a feminist leader with her years of work to end gender discrimination, but goes way beyond her groundbreaking cases.
Ginsburg’s nephew Daniel Stiepleman, who is the film’s screenwriter, showcases not only Ginsburg’s remarkable achievements in the courtroom in the movie, but also her 56-year marriage to the late Martin Ginsburg, a tax lawyer and professor.
"She has a reputation for being kind of — you know she’s steeling, she’s intellectual and she’s precise. I think something that a lot of people don’t get to see — because they don’t see her at home surrounded by people who love her and who she loves — is that all of that is built on a foundation of joy and eternal optimism," he told ABC News about Ginsburg.
"I really wanted to get that across, and nothing brought that out more in her life than Uncle Martin," he added. "It’s really a story of a marriage and a family."
The process of getting this film off the ground, from the original idea to how specific elements of the script were presented, took time, and as the justice demanded – a lot of precision.
Getting Ginsburg on board

Stiepleman never imagined he would write his aunt’s story.
He came to the realization that a film centered on his aunt Ruth and uncle Martin’s love story and the landmark case they worked on together in 1972 – Charles E. Moritz v. Commissioner of Internal Revenue – would make "an incredible movie" during a rather unconventional and sad time – his Uncle Martin’s funeral in 2010.
"A friend of his gave a eulogy, and he sort of briefly mentioned the only case that Ruth and Marty ever argued together, which also happened to be her first case and what became a landmark gender equality case," he told ABC News.
The writer was not only inspired by his aunt’s incredible achievements within the field of law but also because of the strength of her marriage with her late husband.
"For me I was pretty newly married at the time, and my wife and I very consciously were like 'We want to be like Ruth and Marty. That’s the marriage we want to have.'"
Stiepleman decided it was not the best time to investigate the film idea given his uncle’s death and held off on presenting it to his aunt.
"I thought, 'OK, it’s too bad, what a shame I can never write it,'" he shared. "Except that I couldn’t stop thinking about it, and so finally after over a year I called Aunt Ruth, and I said 'look I have this idea, and I’d like your permission, and I would love your help.'"
While Ginsburg initially questioned his interest in the gender discrimination case, and pointed out that she’s argued monumental Supreme Court cases, she agreed when she heard his explanation.
"I said 'yeah, but this is the only one you ever argued together,'" Stiepleman shared.
"'It’s the two of you fighting in court for the same thing you managed to somehow create at home, that’s real equality.' Then she kind of got it, but her ringing endorsement was, 'Well, if that’s how you think you want to spend your time.'"
Meeting with the justice in her chambers

The film’s director, Mimi Leder, met with Ginsburg repeatedly before creating the film to get a sense of the woman behind the prestigious career.
"I met her in her chambers, and it was really amazing and intimidating because you realize 'Oh my god, you’re really making a film about a real-life icon, a personal hero of mine,'" Leder told ABC News.
The duo discussed many things about her upbringing, her life with Martin and the case itself.
"It was like a first date. I had to ask her personal questions, and you’ve just met, so it’s kind of scary and you never know if you’re going too far with the questions," she said.
She wanted to understand "the character of a young Justice Ginsburg."
"You know, what was going on in her mind at the time. Why was Marty the one," she added.
Ginsburg also opened up her home to Leder and showed her personal mementos from her career and life with Marty.
"It was great discovering all those truisms about her, and it allowed Felicity [Jones] and I to really dig deep," she said.
Stiepleman was living with Ginsburg while he was writing the screenplay, so the two often spent time together discussing her life.
She also directed her nephew to the Library of Congress, where he studied her files from the '60s and '70s, and gave him what he described, with a laugh, as a list of "900 books."
"It was one sort of big intense research process right at the beginning and then as questions came up throughout I would give her a call or shoot her an email," he said, adding he spent around three months researching before starting to write the script.
Highlighting how progressive the Ginsburg marriage was

In the 2018 CNN film "RBG," the Supreme Court justice praised her husband for always treating her as an equal.
"He was the first boy I ever knew who cared that I had a brain. Most guys in the '50s didn’t," she said in the documentary.
"One of the sadnesses about the brilliant girls who attended Cornell is that they kind of suppressed how smart they were. But Marty was so confident of his own ability, so comfortable with himself, that he never regarded me as any kind of a threat," she continued.
Leder recognized how progressive the union was for the '50s and aimed to show that in "On the Basis of Sex."
"Their love story, their marriage, their partnership was a real important aspect of this film – how this equal marriage became a metaphor for the film of equal partnership," she said.
Through her conversations with Ginsburg, she learned just how unique it was.
"Their relationship was really revolutionary in the '50s — I mean Marty was a man who partook in the parenting. He did the cooking. She was a horrible cook," Leder said.
"Both aspects of their marriage were really important to show because even today men who partake in the parenting are – there's obviously quite many more than there was in the '50s, but it’s still not a thing that every man does, too," she added.
"I still feel today, it’s very important to show an equal partnership in a movie about equality."
Ginsburg's influence on the screenplay

To say Ginsburg is an extremely public figure would be an understatement.
Outside of her presence in the Supreme Court, she became a prominent figure in pop culture with the explosion of her "Notorious R.B.G." nickname, created in 2013. She is also a hero to many young women around the world.
The justice mainly had two factors that she didn’t want inaccurately portrayed in the film.
"She wanted the way the law is practiced to be right, and she wanted Uncle Martin to be right," Stiepleman said.
"The rest I pretty much had free reign," he added.
However, it took some back and forth to get to that point. "When I finished my first draft I sent it to her, and she read it like it was a contract. She’s like 'Okay page 1,' and went through this thing line by line," Stiepleman said.
In one scene, Ginsburg noted that her character was wearing heels. Stiepleman said she remarked, "'Oh, in those days I used to walk to Harvard, so I didn’t really wear heels.'"
"As you would hope and expect, she’s a stickler for detail, so we had to have a discussion early on," he said.
Stiepleman needed to understand the elements she was passionate about being emphasized correctly versus those that he could use creative license on, such as incorporating heels to make her stand out while surrounded by men.
Ginsburg was adamant that she was not recognized with inventing gender discrimination law.
"The only other big note she gave me was she said 'I just don’t want people to think that I invented this area of the law.' She said, 'I built my career on the shoulders of generations of women who came before me, people like Pauli Murray and Dorothy Kenyon, and people should know that,'" he said.
"And then I’m left with that note – people should know that…" Stiepleman shared with a laugh.
'On The Basis of Sex' in the #MeToo era

Leder said the movie helps convey what a tremendous influence Ginsburg has had on generations of women.
"She paved it for all of us. We’re indebted to her," Leder said.
"We really need to continue to use our voices to change the world to make it a better place, a place that’s more equal, that’s more just. And the Time’s Up, Me Too movement is in its infancy. I think we’re in the beginning of it, and it’s here to stay," she added.
While they were shooting the film, Leder said the Harvey Weinstein and Kevin Spacey stories broke.
"We knew we were making a timely film, and then it became even more timely. We didn’t really change anything in the script at all," she said. "The story was there to be told, and I hope people see the film and see what she did for all of us and what she continues to do, and how much we need her and how we need smart people who believe in justice."
Stiepleman said he was aware of the film coming at such an important part of history, but wishes it wasn't.
"Given the choice, I would rather we have resolved these problems in our culture rather than them be so prevalent," he said.
Most importantly for him, the writer and director of the film managed to make the film "joyous," which is what Ginsburg appreciated about it so much, he shared.
"She said, 'That’s what the '60s and '70s was for me as a feminist — this feeling that the world was improving and that we were at the forefront of this change.'"
"I think it’s the perfect combination of what we need right now. It’s a story about a woman’s strength to change the world, but it’s also a joyous story about that. I think we could use a little joy and optimism right now," he added.
Leder and Stiepleman both agree that there is much more that can be done to help us progress as a society.
"We still need gender parity. We still need equality in the workplace and all walks of life. We still need to fight social injustice," Leder said. "In that way, this film is so relevant and still so needed in these times that we’re living in when things are going backwards."
Copyright © 2018, ABC Radio. All rights reserved.

Chance the Rapper and Common call for Illinois to restore discretionary parole for life sentences
‘The Story Of Marvel Studios: The Making Of The Marvel Cinematic Universe’ book includes “personal stories,” authors say
Gwyneth Paltrow reveals how she talks safe sex and healthy relationships with her teenagers
Trump sits for deposition in lawsuit brought by demonstrators alleging assault
Hundreds gather for Miya Marcano’s Celebration of Life ceremony
In 2020, 62% of police deaths were caused by COVID: One officer’s story