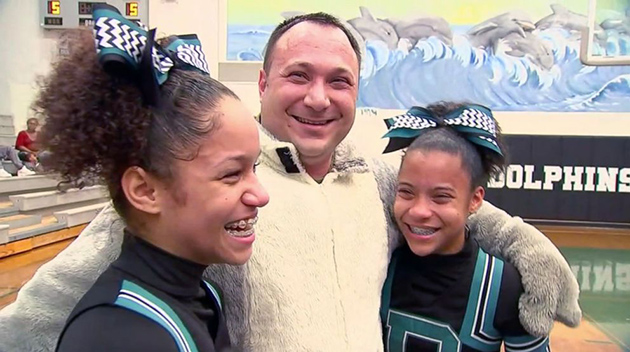 WTVD(RALEIGH, N.C.) — A set of twin sisters received an early Christmas gift on Monday, as their military father surprised them while disguised as a school mascot.
During a basketball game, Technical Sgt. Anthony Pasco of the U.S. Air Force pulled off his dolphin mask at Durant Road Middle School in Raleigh, North Carolina on Dec. 17. Pasco is stationed in Texas and hadn't seen his daughters since April.
"I was overcome with emotion myself," mom Paula Washington told "Good Morning America." "They say military families [should] stay strong. But that's the build-up they had inside of them. They are daddy's girls."
Washington said the girls, A'nina and Zoe, 14, were expecting to fly out to Texas to see Pasco before Christmas, but he came to North Carolina to surprise them instead.
ABC affiliate station WTVD caught the heartfelt moment on camera.
"It was almost like Christmas morning when you open presents," Pasco told "GMA" of the reunion with his girls. "When I saw their faces, it was literally something I'll never forget."
A'nina and Zoe have flown to Texas to celebrate Christmas with their dad and brother Elijah, 11. They'll return home on the 23rd to spend Christmas with their mom in Raleigh.
Copyright © 2018, ABC Radio. All rights reserved.