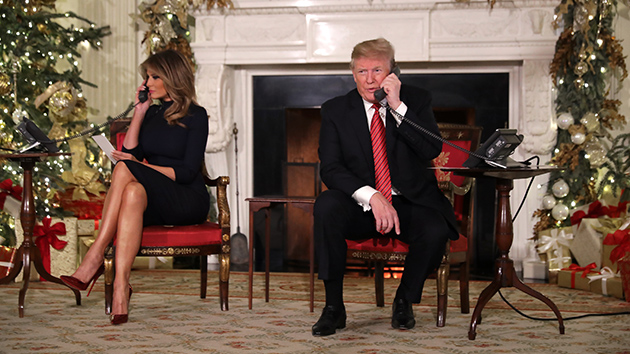 Chip Somodevilla/Getty Images(WASHINGTON) — President Donald Trump did the unthinkable while taking calls about Santa on Christmas Eve: He asked a young boy if Santa Claus was real.
Seated in front a roaring fireplace in the White House State Room, the president asked a 7-year-old named Coleman if he was "still a believer," possibly shaking the young boy's faith in Saint Nick forever.
"Hello, is this Coleman? Merry Christmas. How are you?" Trump asked. "Are you still a believer in Santa? 'Cause at 7 it's marginal, right?" the president added with a chuckle.
The moment happened while the president and first lady answered calls from children around the world who phoned the North American Aerospace Defense Command (NORAD), which has tracked Santa's Christmas Eve trek around the globe for 63 years.
Trump may have been in a gloomy mood due to the ongoing government shutdown and the recent stock market selloff, but he appeared cheerful in subsequent calls.
He was heard laughing, asking kids about their hometowns and then thanking a general for his service.
"What's Santa going to get you for Christmas? Who's with you?" he asked another young caller. "Have a great Christmas and I'll talk to you again, OK?"
First lady Melania Trump tweeted images of the pair taking calls earlier, showing Trump smiling gleefully in a dark-colored suit and red tie. She called the annual event one of her favorite White House traditions.
"Helping children across the country track #Santa is becoming one of my favorite traditions," she tweeted. "@Potus and I enjoyed working with @NORADSanta – #ChristmasEve"

Helping children across the country track #Santa is becoming one of my favorite traditions! @Potus and I enjoyed working with @NORADSanta – #ChristmasEve pic.twitter.com/CYNkARbFaI

— Melania Trump (@FLOTUS) December 25, 2018
NORAD has tracked Santa Claus’ sleigh from the North Pole since 1955. The tradition started when a department store placed a NORAD officer's phone number in a Christmas ad by mistake.
Most government offices were closed due to the shutdown, but NORAD said it would continue the longstanding tradition no matter what.
"In the event of a government shutdown, NORAD will continue with its 63-year tradition of NORAD Tracks Santa on Dec. 24," NORAD tweeted last week. "Military personnel who conduct NORAD Tracks Santa are supported by approximately 1,500 volunteers who make the program possible each and every year."
Copyright © 2018, ABC Radio. All rights reserved.