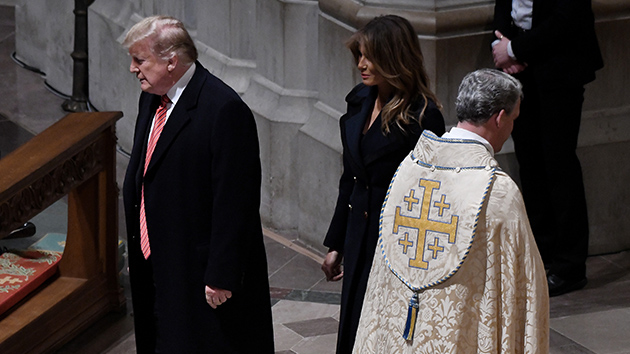 Olivier Douliery – Pool/Getty Images(WASHINGTON) — The first family joined back up in Washington on Monday night as the Trumps attended Christmas Eve mass at the National Cathedral.
The couple arrived to the service, officially titled "The Eve of the Nativity of our Lord Jesus Christ Festival Holy Eucharist," at about 11 p.m. The packed service was streamed live on the National Cathedral's website as well.
President Donald Trump had remained in the nation's capital as he dealt with the partial government shutdown roiling the country and his administration, but first lady Melania Trump had flown with son Barron to Mar-a-Lago in Florida for the Christmas holiday.
Melania Trump boarded a plane in West Palm Beach on Monday afternoon to return to the capital to join with her husband for Christmas. It's not clear whether Barron returned with his mother, and he did not attend the Christmas service.
The first couple was ushered toward the front pews of the National Cathedral — where they had attended a funeral service for former President George H.W. Bush just weeks earlier — by Secret Service personnel.
The president had tweeted, as part of a double-digit Christmas Eve morning tweet storm, that he was "all alone" at the White House residence and "waiting for the Democrats to come back" to tackle the shutdown.

I am all alone (poor me) in the White House waiting for the Democrats to come back and make a deal on desperately needed Border Security. At some point the Democrats not wanting to make a deal will cost our Country more money than the Border Wall we are all talking about. Crazy!

— Donald J. Trump (@realDonaldTrump) December 24, 2018
Presumably no wacky hijinks or burning aftershave were involved in Trump's lonely day before Christmas.
Congress adjourned on Friday and will not return to session until Thursday. Most members of Congress, both Republican and Democrat, returned home for Christmas.
Trump had been planning a two-week vacation to the "winter White House" for the holidays before the government shutdown went into effect at midnight on Saturday. Republicans and Democrats in Congress had agreed to a deal to fund the government, but Trump reversed course and refused to sign it without the $5 billion he requested in order to build his much-touted border wall between the U.S. and Mexico.
About 420,000 government workers are currently doing their jobs without pay and about 380,000 others have been furloughed.
Trump also tweeted about a Monday briefing, and shared a photo saying progress was being made on a second summit with North Korean dictator Kim Jong Un.

Christmas Eve briefing with my team working on North Korea – Progress being made. Looking forward to my next summit with Chairman Kim! pic.twitter.com/zPTtDbrP0o