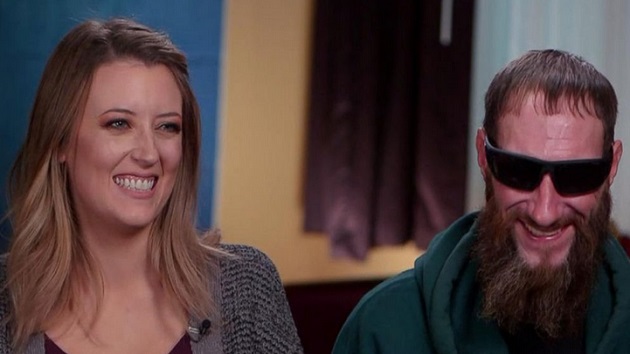 ABC News(PHILADELPHIA) — The fundraising website GoFundMe has fully refunded every one of about 14,000 people who donated more than $400,000 to a New Jersey trio now charged with concocting a cruel hoax involving a seemingly selfless homeless man, a gas can and a $20 bill.
The scam first warmed, then broke the hearts of thousands of Americans before it was exposed as an alleged fraud last month.
"All donors who contributed to this GoFundMe campaign have been fully refunded,” company spokesman Bobby Whithorne said in a statement. “GoFundMe always fully protects donors, which is why we have a comprehensive refund policy in place.”
“While this type of behavior by an individual is extremely rare, it's unacceptable and clearly it has consequences,” he continued. “Committing fraud, whether it takes place on or offline is against the law. We are fully cooperating and assisting law enforcement officials to recover every dollar withdrawn by Ms. McClure and Mr. D'Amico,” referring to two of the three people charged in the alleged scheme.
Whithorne went on to say that fraudulent campaigns make up “less than one tenth of one percent” of all GoFundMe initiatives, but that “one fraudulent campaign is one too many.”
In the fall of 2017, Kate McClure and Mark D’Amico launched a GoFundMe fundraising campaign with a disarming tale about an allegedly homeless veteran named Johnny Bobbitt using his last $20 to help McClure out of a roadside jam when she ran out of gas. It was a tale she repeated alongside Bobbitt in a Nov. 2017 interview on ‘Good Morning America.’
McClure told ‘GMA’ that it was close to midnight one night in 2017 and she was driving alone on I-95 when her car ran out of gas as she was on an exit ramp.
"I pulled over to the side of the road as far as I could and I was going to get out and walk to the nearest gas station because it was not that far away, and that's when I met Johnny," she said. "He walked up and he said, 'Get back in the car. Lock the doors. I'll be back.' I was just like, 'OK." McClure claimed she was stunned when Bobbitt used $20 he had collected from panhandling that day to buy her gas.
"I almost couldn't believe it," McClure added. "I said, 'Thank you…I swear, I'll be back. I promise I'll be back to give you [the] money back.'" For his part, Bobbitt seemed expressed humility in his interview with ‘GMA.’
"I just got her gas to help her get back on her way,” he claimed at the time. “I didn't think anything about it. I wasn't expecting anything in return," he told "Good Morning America." "That's how I got the money to start with — from other people. [I had to] return the favor. I can't constantly take and not give back."
But according to Burlington County Prosecutor Scott Coffina, "the entire campaign was predicated on a lie." Last month, McClure, 28, D'Amico, 39, and Bobbitt, 34, were charged with second-degree theft by deception and conspiracy to commit theft by deception.
All three have pleaded not guilty to the charges, though McClure now claims that she was duped into participating in the scam by the other two. Yet prosecutors charge that she knew it was a hoax from the start.
"Less than an hour after the GoFundMe campaign went live McClure, in a text exchange with a friend, stated that the story about Bobbitt assisting her was fake."
In one of the texts cited by Coffina, McClure allegedly wrote to a friend, "OK, so wait, the gas part is completely made up but the guy isn't. I had to make something up to make people feel bad. So, shush about the made up stuff."
If convicted, each of them faces five to 10 years in prison, prosecutors said.

'They hit the casinos hard'
Coffina said the suspected fraudsters might have gotten away with the scam had Bobbitt not filed a lawsuit against McClure and D'Amico in August, accusing them of withholding the funds from him.
The money is all gone, most of it allegedly squandered by McClure and D'Amico on luxury handbags, a New Year's trip to Las Vegas and a BMW; the couple also used the donated funds to pay back $9,000 they owed to relatives and "hit the casinos hard," Coffina said. Bank records showed they withdrew more than $85,000 at or near casinos in Atlantic City, Philadelphia and Las Vegas, he said.
They were ordered to appear in court on Christmas Eve, but their attorneys waived their appearances, and future court dates have yet to be scheduled.
Bobbitt was arrested Wednesday night by the Philadelphia Police Department on charges of being a fugitive from justice, according to Philadelphia police. He is expected to be extradited to Burlington County to face charges related to the GoFundMe case. Reached Thursday, an attorney for McClure and D'Amico told ABC News, "We have no comment. Have a nice day."
Media blitz
In numerous media appearances, McClure claimed she was driving to meet a friend in September 2017 when she ran out of gas around midnight on the I-95 exit ramp near Philadelphia. Bobbitt, who was sleeping under a nearby overpass, came to her rescue, she would say. She claimed Bobbitt spent his last $20 to buy her gas.
"I pulled over to the side of the road as far as I could and I was going to get out and walk to the nearest gas station because it was not that far away, and that's when I met Johnny," McClure said last November in a "Good Morning America" interview. "He walked up and he said, 'Get back in the car. Lock the doors. I'll be back.' I was just like, 'OK.'"
She said Bobbitt used his panhandling money to get her out of the jam.
"I almost couldn't believe it," McClure added. "I said, 'Thank you… I swear, I'll be back. I promise I'll be back to give you [the] money back.'"
Hoping to repay Bobbitt for the apparent generous act, McClure said she and D'Amico set up a GoFundMe online. The fund was launched on Nov. 10, 2017, just hours after D'Amico took a photo of McClure posing with Bobbitt near the I-95 exit ramp, Coffina said.
"I just got her gas to help her get back on her way. I didn't think anything about it. I wasn't expecting anything in return," Bobbitt told "Good Morning America." "That's how I got the money to start with — from other people. [I had to] return the favor. I can't constantly take and not give back."
'No Good Deed'
Coffina said investigators believe McClure and D'Amico first met Bobbitt about a month before they launched the GoFundMe campaign near the Sugarhouse Casino in Philadelphia, close to the I-95 off-ramp where Bobbitt was living on the streets at the time.
Asked who came up with the idea of the scam, Coffina noted a 2012 Facebook post written by Bobbitt that was "remarkably similar" to the narrative on the GoFundMe page.
"He reported that he helped a woman who had both run out of gas and had a flat tire at a Walmart, spent his last supper money to get her on her way and fix her flat tire," Coffina said. "I don't think that's a coincidence."
Among the few things about the story that's true is that Bobbitt served in the Marine Corps and was homeless, Coffina said.
Military records obtained by ABC News show that Bobbit served in the Marines as an ammunition technician from December 2002 to February 2004, and was awarded a National Defense Service Medal.
"He deserves our appreciation for his willingness to serve our country as a United States Marine and he has our sympathy and concern for the homelessness that he's experienced, as well as his publicized struggle with addiction," Coffina said.
"But it is imperative to keep in mind that he was fully complicit in the scheme to defraud contributors, promoting the campaign in multiple media appearances and posing with D'Amico and McClure for a Philadelphia Inquirer story in front of a gas station that he did not buy gas from."
In August, Bobbitt filed a lawsuit accusing McClure and D'Amico of committing fraud by taking more than half of the money they raised for themselves.
His pro bono attorney alleged in court papers that the couple treated the donations like their "personal piggy bank to fund a lifestyle that they could not otherwise afford."
D'Amico and McClure denied the allegations.
In September, the Burlington County Prosecutor's Office launched a criminal investigation into the missing GoFundMe donations and raided the couple's home, seizing a BMW and other belongings.
Coffina said that even after burning through most of the money and getting sued by Bobbitt, D'Amico was allegedly thinking of ways to keep the scam going, including landing a book deal.
"He was certain the payday from the book deal they were pursuing would dwarf the money from the GoFundMe campaign," Coffina said. "A few months later, when the dispute with Bobbitt became public, D'Amico was not dissuaded. Instead, he pitched a title for the book that would encompass the controversy, 'No Good Deed.'"
Copyright © 2018, ABC Radio. All rights reserved.