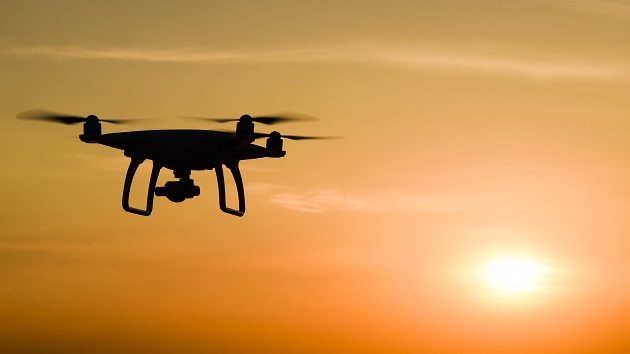 iStock/Leonid Eremeychuk(LONDON) — Sussex police have confirmed they are investigating 67 reports of drone sightings from Gatwick and that they are investigating a device found near Gatwick Airport, after initially casting doubt on whether the drone existed at all over the weekend.
“We are actively investigating sightings of drone activity at Gatwick Airport following 67 reports from the evening of the 19 December to 21 December from the public, passengers, police officers and staff at the airport,” Detective Chief Superintendent Jason Tingley said in a statement on Monday. “We are interviewing those who have reported these sightings, are carrying out extensive house to house enquiries and carrying out a forensic examination of a damaged drone found near the perimeter of the airport near Horley, which is close to the last reported sighting.”
The statement came after the investigation threatened to descend into farce when Tingley told the BBC there was a “possibility" the drone did not exist at all. "We are working with human beings saying they have seen something,” he said in an interview on Sunday.
The authorities are now looking to move on from the confusion caused by that interview, saying, “We can unequivocally state that there have been numerous illegal drone sightings at the airport over three days.”
“There were numerous reports clustered around 37 occasions where a drone or drones were seen and I am keen for those responsible to be brought to justice,” Sussex Police Deputy Chief Constable Jo Shiner said in another statement issued on Monday. “The impact of this criminal and reckless behaviour has been enormous and we are determined to locate those responsible to bring them to justice. We are investigating this under the Aviation and Maritime Security Act which carries a maximum sentence of life imprisonment.”
A government source said the statement issued saying the drone may not have existed was “a miscommunication by the police,” according to the BBC. A £50,000 ($63,500) reward is now being offered for information related to the illegal drone sightings.
The offer of a reward comes after a 47-year-old man and a 54-year-old woman were released without charges Sunday after having been taken into custody in relation to the drone sightings.
The pair were released, but not before their names and pictures were widely published in British media. This included a headline in the Mail on Sunday, which said, “Are these the morons who ruined Christmas?” alongside a picture of the pair.
"It is important to remember that when people are arrested in an effort to make further enquiries it does not mean that they are guilty of an offence and Sussex Police would not seek to make their identity public," police said in a statement.
The drone incident resulted in cancellations that affected more than 110,000 passengers as Gatwick Airport was closed for 26 hours between Wednesday and Friday last week.
Copyright © 2018, ABC Radio. All rights reserved.