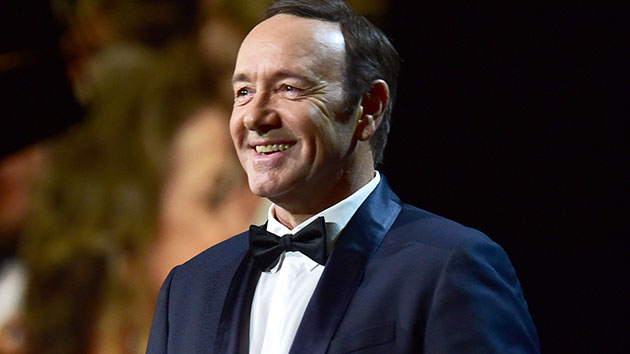 Spacey is scheduled to be arraigned January 7 in Nantucket District Court in Massachusetts on a felony charge of indecent assault, following a hearing that was held last Thursday.

TV journalist Heather Unruh held a press conference in Boston November 8th of last year to announce that in July 2016, Spacey allegedly got her then 18-year-old son drunk, and fondled him in a Nantucket Island restaurant in which the young man worked.

"The complainant has shown a tremendous amount of courage in coming forward," said Unruh attorney Mitchell Garabedian, in a brief statement Monday to ABC News. "Let the facts be presented, the relevant law applied and a just and fair verdict rendered."

News of the pending criminal charge comes on the same day that Spacey posted his first message to Twitter since October 29, 2017. In a three-minute video titled 'Let Me Be Frank' that's heavy with subtext and double meaning in the wake of the announcement of the criminal charge, Spacey affects the persona of his former House of Cards character, President Frank Underwood, who was killed off prior to the show's final season after Spacey himself was fired from the show in the wake of sexual misconduct allegations.

Spacey stands at a kitchen sink, wearing a Santa Claus-print apron with a partially carved turkey at his right elbow. Voices and laughter, as if from unseen party guests, drift in from an adjacent room.

"I know what you want," Spacey begins as Underwood. "Oh sure, they may have tried to separate us but what we have is too strong, it's too powerful. And after all, we shared everything, you and I. I told you my deepest, darkest secrets. I showed you exactly what people are capable of."

Spacey goes on: "Of course some believed everything and have just been waiting with bated breath to hear me confess it all. They're just dying to have be declare that everything said is true and that I got what I deserved. Wouldn't that be easy if it were all so simple? Only you and I both know it's never that simple, not in politics and not in life. But you wouldn't believe the worst without evidence, would you? You wouldn't rush to judgments without facts, would you? Did you? No, not you. You're smarter than that."

The video ends with Spacey saying: "Despite all the poppycock, the animosity, the headlines, the impeachment without a trial — despite everything, despite even my own death, I feel surprisingly good. And my confidence grows each day that soon enough, you will know the full tru–"

There follows a long pause, after which Spacey continues: "Oh, wait a minute. Now that I think of it, you never actually saw me die, did you?" Spacey then slips on Underwood's class ring from his fictional alma mater, The Sentinel, and ends with: "Conclusions can be so deceiving. Miss me?"

A Netflix spokesperson told ABC News they had nothing to do with the video.

The Unruh accusation came on the heels of a litany of sexual assault allegations against Spacey that began when Star Trek: Discovery actor Anthony Rapp accused Spacey in a Buzzfeed piece of making a sexual advance on him in 1986, when Rapp was 14 and Spacey was 26. Rapp claimed a drunk Spacey carried him to a bedroom and climbed on top of him after a party. Both were appearing in Broadway plays at the time.

Since then, Spacey has been accused of either inappropriate behavior and.or sexual misconduct by numerous people, including some staffers on House of Cards. Spacey was missing from the show's final season this year after he was fired in the wake of the accusations.

England's Scotland Yard opened an investigation after an alleged victim told officers Spacey performed a sex act when the younger man fell asleep at Spacey's residence, during the time the actor worked at the Old Vic. The theater itself in November, 2017 announced an internal investigation revealed at least twenty people over a period of 18 years reported being the subject of inappropriate behavior by Spacey, including during the decade before Spacey was the Old Vic's artistic director.

Microsoft shareholders vote to force company to better report sexual harassment data
AMC announces ‘Kevin Can F*** Himself’ will end after season 2
Taraji P. Henson preps for ‘Annie Live!’, Kevin Hart makes it a merry holiday for youth, and more
Prosecutors in Ahmaud Arbery trial say cellphone video was key for verdicts
As Amazon takes victory lap for ‘The Wheel of Time’ debut, it’s eyeing series based on ‘Mass Effect’ video game
Hailee Steinfeld on her two Marvel characters, and why she was Kevin Feige’s “dream” star for ‘Hawkeye’