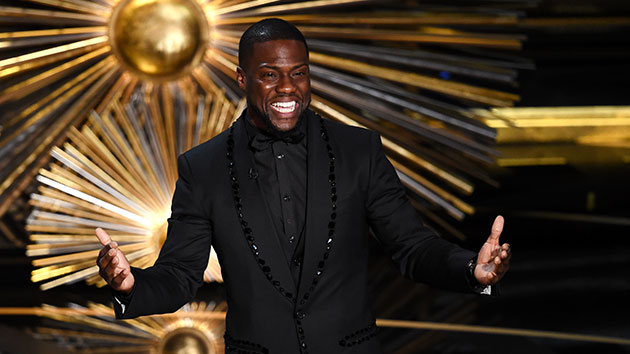 Kevin Winter/Getty Images(NEW YORK) — After stepping down as the Academy Awards host, Kevin Hart is ready for a great 2019.

"Nobody can stop me from achieving my goals but ME,” he tweeted.

The comic and actor is planning to make 2019 a great year with several projects, including the follow-up to his 2017 blockbuster Jumanji: Welcome to the Jungle, co-starring Dwayne Johnson.

After recently stepping down as host of the Oscars, Hart has plenty to occupy this time. The three-time NAACP Image award winner tweeted a long list of projects for the new year, including a comedy special on Netflix titled Irresponsible; Secret Life Of Pets 2, opening in the summer; and his next film, The Upside, which opens January 11.

The 39-year-old entertainer also announced he’s “dropping a dope a** documentary,” working on a new book, “producing tons of TV/Movies,” and running another marathon.

Hart is also expanding his brand with a health supplement line, fitness equipment line, and even underwear and pajamas. He also plans to send “more kids to college for free.”

The Night School star is the second highest-paid comedian of 2018 according to Forbes, earning $57 million in 2018, just a half-a-million dollars behind the top dog, Jerry Seinfeld.

“This goal is to make this year one of my biggest. I feel like I’m only getting better,” Hart wrote. “Let’s goooooo people. Get your head in the game and let’s all prepare to make 2019 an amazing year!!!!! #LiveLoveLaugh"

Dodgers Justin Turner likely out for year after hamstring injury
Colts safety Julian Blackmon out for year
Holiday travel may be more chaotic than ever this year, transportation experts say
It’s that time of year: ‘The Simpsons’ “Treehouse of Horror” returns Sunday
COVID-19 live updates: More Americans died of COVID this year than all of 2020
From fire to floods, extreme weather keeping students out of classrooms this school year