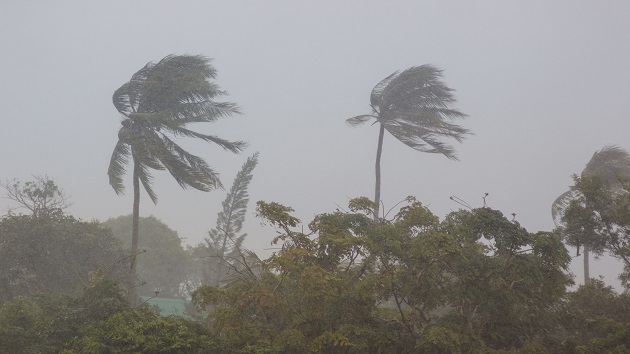 iStock/Sergey Gordienko(PANAMA CITY, Fla.) — Rex Clark and his wife, Carol, hunkered down in their Florida home during Hurricane Michael, only to have it be destroyed around them.
The couple was left with nothing but the difficult decision to move out and move on. Still, this Christmas, the only gift they asked for was to be with family.
“We’re just going to be together as a family, and truly that’s what it’s about,” Clark told ABC News’ Brad Mielke for the ABC News podcast “Start Here.”
“We demanded nothing. We said ‘Do not bring us anything except yourselves, because that's what we want for Christmas: we want our family with us.’ And that's what we're doing," he said. "And I can't think of a better way to spend it.”
Clark will celebrate the holidays at his new home in Alabama after losing what he and his wife called “the sunshine house” in Panama City, Florida. The light yellow, concrete structure with original oak floors built in 1947 was ravaged by the 155 mph winds and crushing rain of Hurricane Michael.
“It wasn’t big, it wasn’t fancy — but it was ours,” Clark said.
When the storm made landfall along Florida’s Gulf Coast as a Category 4 storm, the largest to hit since Hurricane Andrew in 1992, the Clarks decided to hunker down and ride it out.
At the time, Clark described the chilling scene on the phone with ABC News’ Aaron Katersky. In the hours that followed, he said they “lost everything.”
Two months later, Clark recalled what it was like to assess the damage and the moment they escaped their crippled house.
“At the bottom of our steps is this 150-year-old oak tree that used to sit about five feet from our door. That was the tree that got slammed into our roof, and when the winds had changed direction, it spun off the roof, and that's what took the roof off with it,” he said.
“We couldn’t get out the front door because it had landed right at the base of the steps and we couldn't get around it — the back doors were blocked as well by trees,” he added. “We walk out and it was a very eerie silence watching my wife walk along this tree and just looking at [the house] she put so much of her heart and soul into.”
“The look on her face crushed me — it absolutely crushed me, because I could truly see in her eyes what I was seeing from her perspective. And I don't think I'll ever, I’ll ever forget that.”
The National Guard and Red Cross came in to help with emergency efforts along with neighbors in the community pulling together as more storms approached.
“I can't tell you how much I appreciated what they did. It was this little enclave and everybody helped everybody people helping each other put up tarps,” Clark said.
But to Clark’s disappointment, one company, who he said he would not name, tried to take advantage of him and his wife by putting a costly premium on a tarp for their roof.
“I will never ever ever forget that they wanted $1,000 to put a tarp over the hole in our roof,” he recalled, outraged when his wife showed him the contract. “I blew up.”
He continued, “I went and talked to my neighbors and 30 minutes later I had neighbors from next door, neighbors from across the street up on my roof, and an hour later my roof was tarped. That's just an example of what people had to deal with is not only losing everything, but people coming in and just trying to take advantage.”
An insurance adjuster came within the week, and Clark said “every single wall was showing 100 percent moisture — that means they have to be torn out.”
Upon realizing the severity of the damage and that it could be years before their neighborhood bounced back, he said “we came to the decision that we did not want to rebuild.”
“We just didn’t want the stress of having to deal with it and just came to the decision that Panama City just wasn’t a place for us anymore,” he said.
The Clarks moved to Alabama about 50 miles from the Florida border. “We found a beautiful house, we found a nice quiet neighborhood, the people are wonderful. It’s peaceful. It’s giving us a break," Clark said.
And after a difficult year, Clark said he “can’t think of a better way to spend” Christmas than with his family.
“Our daughter and son brought our granddaughter from New Orleans, and they’re going to celebrate it with us," Clark said, "and we’re just going to be together as a family.”
Copyright © 2018, ABC Radio. All rights reserved.