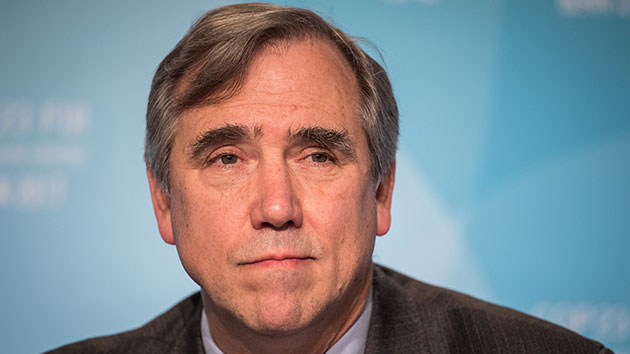 Lukas Schulze/Getty Images(WASHINGTON) — Sen. Jeff Merkley said the Democratic Party will not agree to any funding for a border wall along the U.S.-Mexico border, one of President Trump’s central campaign promises that is at the heart of the ongoing partial government shutdown.
“We're absolutely willing to fund border security,” the Oregon Democrat, who is weighing a run for president in 2020, said on This Week Sunday.
“The American people want us to spend money in a smart way. Five billion dollars is a lot of money," he said, adding, "To spend it on a fourth-century strategy rather than on stuff that actually improves border security is something that we're just not going to do.”
“So, let me be clear, Democrats are not going to agree to any funding to build new border wall -– none?” ABC News' Chief White House Correspondent Jonathan Karl asked.
“That's correct,” Merkley said. “None.”
At 12 a.m. Saturday, the government partially shut down after the White House and Congress couldn’t reach a budget funding deal, with President Trump saying he wouldn’t sign a bill that didn’t include $5 billion for the construction of a wall along the U.S.-Mexico border.
The House passed a deal, including over $5 billion in border wall spending, Thursday after Trump indicated he would not sign the short-term funding bill passed by the Senate, which included less than $2 billion for border security. The House proposal has stalled in the Senate as congressional leaders negotiate the terms of a deal.
Congress has adjourned for the holiday, making it unlikely a deal will be reached before Congress reconvenes this Thursday.
Merkley mentioned his recent travels to the U.S.-Mexico border, and said the border patrol agents there told him that the president “just doesn't get it.”
“When you talk with the border guards, they fill you in on what's really happening and say the president's vision and understanding of the law — he just doesn't get it,” Merkley said on “This Week.” “He doesn't get that the drugs are coming through tunnels. He doesn't get that they need high-security sensors."
Merkley cited a prior bipartisan proposal that included funding for border security that could be the basis of future negotiations.
“We have a plan — a bipartisan plan — that is on the table. We have the 2013 plan that passed by a supermajority in the Senate that would address the vast bulk of these issues. So we're ready for a broader discussion; the president hasn't been there,” Merkley said.
Karl pressed Merkley, noting that the 2013 deal included funding for border security, including 700 miles of fencing. Merkley countered by saying that the 2013 plan is starkly different from Trump’s proposal for a large border wall or steel slats.
“There's a difference between a fence and wall,” Merkley said.
“There is?” Karl pressed.
“Thirty-foot-concrete wall, 30-foot steel spikes — that's not the smart way, and that's what all the experts on the border tell us,” Merkley said.
Copyright © 2018, ABC Radio. All rights reserved.

Lawmakers say Amazon reps, including Jeff Bezos, misled or ‘may have lied to Congress’
William Shatner tells Jeff Bezos: ‘Everybody in the world needs to do this’
Democrats will reach a deal on Biden’s agenda: Hillary Clinton on ‘The View’
Kyrsten Sinema has rankled fellow Democrats, but will it matter in her home state of Arizona?
Senate votes to raise debt limit after 11 Republicans join Democrats to break filibuster
Democrats expected to take short-term debt ceiling increase, reject GOP reconciliation offer