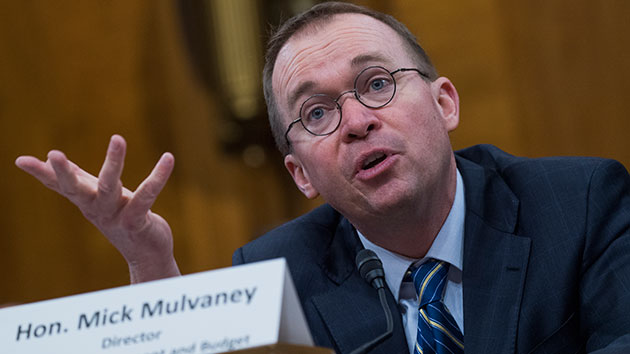 Tom Williams/CQ Roll Call(WASHINGTON) — Incoming acting White House Chief of Staff Mick Mulvaney said Sunday that President Trump is not going to change his mind about withdrawing troops from Syria, even after both his secretary of defense and top U.S. diplomat for the campaign to defeat ISIS resigned because of the decision.
“Is there any chance the president changes his mind about this and reverses course?” ABC News Chief White House Correspondent Jonathan Karl asked Mulvaney in an interview on This Week.
“No, I think the president has told people from the very beginning that he doesn't want us to stay in Syria forever. You're seeing the end result now of two years' worth of work,” he said.
Mulvaney is replacing John Kelly as chief of staff in the new year. He has previously served as the director of the Office of Management and Budget.
The president announced via Twitter on Thursday that James Mattis would be retiring at the end of February.
In Mattis’ resignation letter, the secretary of defense said he was leaving the administration so that President Trump could have a cabinet member with views “better aligned” with his own. His resignation came just a day after the president announced he would be pulling all U.S. troops out of Syria, and following news reports that Trump also planned to withdraw thousands of U.S. troops from Afghanistan.
On Sunday, however, Trump took to Twitter again to announce that Deputy Defense Secretary Patrick Shanahan would take over the role in an acting capacity starting Jan 1.
"I am pleased to announce that our very talented Deputy Secretary of Defense, Patrick Shanahan, will assume the title of Acting Secretary of Defense starting January 1, 2019," he wrote. "Patrick has a long list of accomplishments while serving as Deputy, & previously Boeing. He will be great!"
Mulvaney said he doesn’t think the president was surprised by Mattis’ resignation, referring to an interview where Trump called Mattis “sort of a Democrat,” and also said he wasn’t aware whether the president tried to convince Mattis to stay.
“Mattis and he just could never get on the same page,” Mulvaney said on This Week.

On Saturday, Brett McGurk, the special presidential envoy for the Global Coalition to Defeat ISIS, also resigned because of Trump’s decision. In an email to staff, McGurk said the president’s decision “came as a shock and was a complete reversal of policy that was articulated to us.” He added that he “could not carry out these new instructions and maintain my integrity.” The contents of the email were first reported by The New York Times and confirmed by ABC News.
Trump tweeted Saturday about the news that McGurk had resigned, saying he didn’t know him and accused the media of “making such a big deal about” his departure.
Last week, before the president wrote on Twitter, “We have defeated ISIS in Syria,” McGurk said at a State Department briefing that "even as the end of the physical caliphate is clearly now coming into sight, the end of ISIS will be a much more long-term initiative."
"Nobody is declaring a mission accomplished," he added.
Copyright © 2018, ABC Radio. All rights reserved.