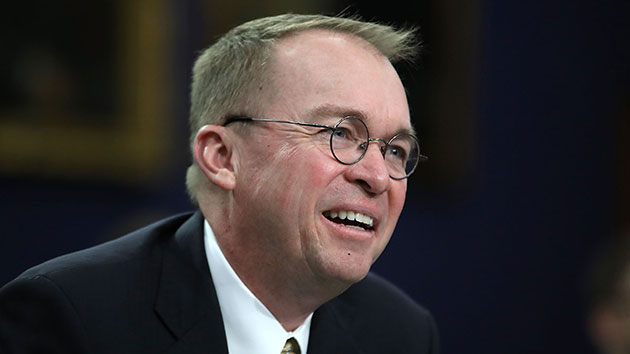 Mark Wilson/Getty Images(WASHINGTON) — The president's incoming chief of staff said Sunday that any money for the border wall would have to come from the Treasury Department, saying the "Department of Homeland Security can't actually spend money from Mexico."
"Technically, you and I both know that it cannot work exactly like that," Mick Mulvaney told ABC News Chief White House Correspondent Jonathan Karl when pressed about President Trump's campaign promise that Mexico would pay for the wall. "The Department of Homeland Security can't actually spend money from Mexico. We have to get it from the Treasury."
Mulvaney also echoed a claim from President Trump and the White House that Mexico will "pay" for the wall through cost savings to the U.S. from the new U.S.-Mexico-Canada trade agreement, or the USMCA.
On Tuesday, ABC News Senior National Correspondent Terry Moran pressed Sarah Sanders, the White House press secretary, on that point.
Sanders said "we're not asking American taxpayers" for money for the wall, and added that "the president has been clear that the USMCA deal would provide additional revenue through the deal that would show that Mexico has paid for the wall."
Moran pushed back, saying, "But trade benefits go to private citizens. They don't go to the United States Treasury."
Mulvaney said that, through the new agreement, "American workers are going to do better, the government is going to do better, and you could make the argument that Mexico is paying for it in that fashion."
At 12 a.m. Saturday, the government partially shut down after the White House and Congress failed to reach a funding deal, with President Trump saying he wouldn't sign a bill that didn't include $5 billion for the construction of a wall along the U.S.-Mexico border, one of his core campaign promises.
Sen. Chuck Schumer, the Senate minority leader, and Rep. Nancy Pelosi, the incoming speaker of the house, have said that Democrats will not agree to any appropriations bill that includes money for a border wall. An NPR/PBS NewsHour/Marist poll released earlier this month showed that 57 percent of Americans believed the president should compromise on border wall funding to keep the government open.
About 75 percent of the federal government has already been funded, but key agencies such as the State Department, Justice Department and Department of Homeland Security shut down for all except non-essential employees when no agreement was reached.
Congress has adjourned for the holidays without a deal between lawmakers and the administration. The Senate reconvenes on Thursday, but Senate Majority Leader Mitch McConnell left open the possibility of convening earlier if a deal is struck. House Majority Whip Steve Scalise's office told ABC News there would not be votes in the House before Thursday.
Copyright © 2018, ABC Radio. All rights reserved.