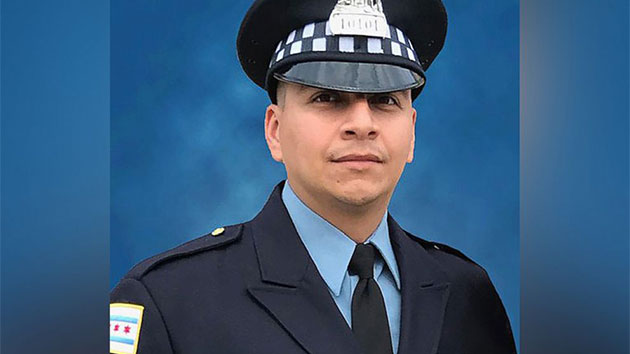 Chicago Police(CHICAGO) — Chicago Mayor Rahm Emanuel was overcome with emotion Saturday as he reflected on the life and legacy of Chicago police officer Eduardo Marmolejo, who was struck and killed by a train in the line of duty Monday.

Marmolejo, 36, is survived by his wife, who was his high school sweetheart, and their three daughters.

"Your husband's remarkable life and legacy will endure through your three incredible girls," Emanuel said at Saturday's funeral.

The mayor wiped away tears as he recognized Marmolejo's parents, who emigrated from Mexico.

"He wanted to bring honor to their sacrifice they made," the mayor said.

Marmolejo's oldest daughter, 15-year-old Rebecca, also spoke at the service, reading a letter she wrote to her father.

"I miss you so much. I cannot tell you how many times I've cried just thinking of you," she said. "I have so much to say and now there's no time. I never knew what getting my heart broken felt like until now."

"Knowing that I'll never get to hug or even see you again breaks my heart into a million pieces," Rebecca continued through tears. "There's no one else like you. I love you more than all the stars in the sky."

Rebecca also told those in attendance: "Please, when you go home, hug everyone that means something to you. Tell them you love them, because in the end it isn't worth knowing you could've given more time and love and effort into that person."

During the service, Chicago Police Superintendent Eddie Johnson vowed to be there for Marmolejo's family, including every birthday, anniversary, holiday and graduation.

"You're not alone," he said. "You will not be alone this Christmas, next Christmas, or the Christmas after that."

"You've gained an entire department of guardian angels," he added.

To Marmolejo's daughters, Johnson said, "Your dad was a hero. … He's a man that everyone here should aspire to be."

Marmolejo, who joined the police department in 2016, and fellow officer Conrad Gary were chasing a suspected gunman when they were both hit and killed by a train Monday night. The suspected gunman was later taken into custody.

Marmolejo and Gary were "running towards the sound of gunshots," Johnson said, "dedicated to getting another gun off the streets of Chicago."

"Officers Marmolejo and Gary stepped up on our behalf, and placed themselves in harm’s way to protect all of us," he said.

The love and support from outside agencies at the funeral services for Fallen Chicago Police Officer Eduardo Marmolejo. #NeverForgotten #BrothersInBlue pic.twitter.com/cYx9d4F5t1

Gary was laid to rest on Friday. Marmolejo and Gary were the third and fourth Chicago police officers to die in the line of duty this year.

PO Conrad Gary and PO Eduardo Marmolejo. Always remember the names of our brave officers who were killed in the line of duty last night. #NeverForget pic.twitter.com/2WYQUOZo2m