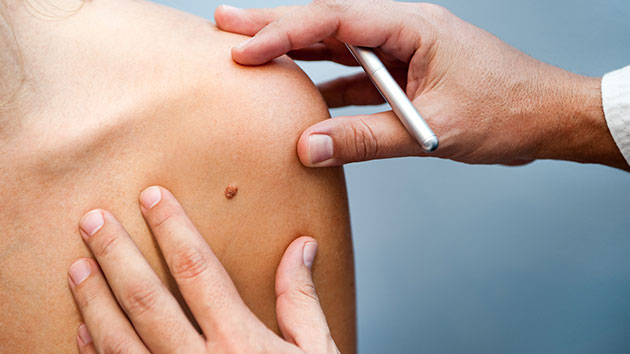 iStockBy DR. MARK ABDELMALEK
(NEW YORK) — Could an extra 72 seconds in a routine skin exam help detect skin cancer?
This month, a group of experts from the United Kingdom released a report on the effectiveness of a small handheld magnifying device called a dermatoscope in diagnosing melanoma compared to a dermatologist’s naked eye.
Cochrane, an organization that gathers evidence to help people make the most informed health care decisions, asked the experts to conduct a review of over 100 different studies where dermatoscopes were used to help diagnose melanoma, the most serious type of skin cancer. The experts analyzed data from 40,000 skin lesions where 5,700 tested positive for melanoma.
The expert review found that dermatoscopes can help find a melanoma — but only in the hands of experienced dermatologists.
What is a dermatoscope?
A dermatoscope is a magnifying tool about the size of a small computer mouse that uses light to give a bigger, clearer picture of a skin lesion. The practice of using a dermatoscope is called dermoscopy. During an examination, dermatologists put dermatoscopes on or slightly above skin lesions and look for specific patterns, shapes, colors and structures not visible to the naked eye to get a better sense whether a spot is worrisome for skin cancer.
Dr. Jason Lee, a professor and vice chair of dermatology and cutaneous biology in the Sidney Kimmel Medical College at Thomas Jefferson University in Philadelphia, said dermoscopy can “make the topmost layer of skin translucent to give a clearer view of the structures underneath.”
A 2008 study in JAMA Dermatology found that using a dermatoscope adds 72 seconds to a dermatologist’s skin examination.
Can dermoscopy help diagnose melanoma?
The researchers applied their findings to a theoretical group of 1,000 skin lesions of which 120 were melanoma. When dermatoscopes were used, 19 melanomas were picked up that would have been missed by a naked eye examination alone, the researchers said.
Adding a dermatoscope also meant that 176 fewer lesions were incorrectly identified as melanomas, potentially saving people from having a skin biopsy.
Dermoscopy can “decrease biopsy of benign lesions and increase biopsy of melanomas,” Lee said.
Should your dermatologist be using a dermatoscope?
Handheld dermatoscopes first appeared in the 1990s but have only become widely used in the last 10 to 15 years.
Dr. Anthony Rossi, assistant attending of dermatology at Memorial Sloan Kettering Cancer Center in New York, said while board-certified dermatologists are trained to look for certain clues with the naked eye, dermatoscopes can be “like a dermatologist’s stethoscope.”
A survey in the Journal of the American Academy of Dermatology in 2010 found that 48 percent of U.S. dermatologists used dermoscopy on their patients. By 2014, that number rose to 80 percent, in another survey published in the same journal.
Dr. Whitney High, professor of dermatology and pathology at the University of Colorado School of Medicine, said dermoscopy can be very useful in the right circumstances but doesn’t replace the naked eye exam.
“The naked eye has been serving us for a long period of time in dermatology,” he said.
Can dermoscopy save you from having a skin biopsy?
A 2018 Harvard study found that more than one in five biopsies in the United States are performed by someone other than a dermatologist, including nurse practitioners, physician assistants and primary care doctors. There is some evidence that seeing a dermatologist who uses a dermatoscope or other emerging technologies that combine lasers and microscopes as part of a skin check can lower one's chances of having a skin biopsy.
“One of the best things dermoscopy does is it cuts down on the biopsy rate,” Rossi said.
A 2010 study published in the Journal of the American Academy of Dermatology found that the number of biopsies decreased by 38 percent after dermatologists gained a year of experience using the diagnostic tool. High said experience is important.
“If you don’t know what you are doing, the dermatoscope doesn’t help,” he said, adding that providers need training.
Dr. Mark Abdelmalek is an ABC News medical contributor. He is also a board-certified dermatologist and Mohs surgeon practicing in the Philadelphia area.