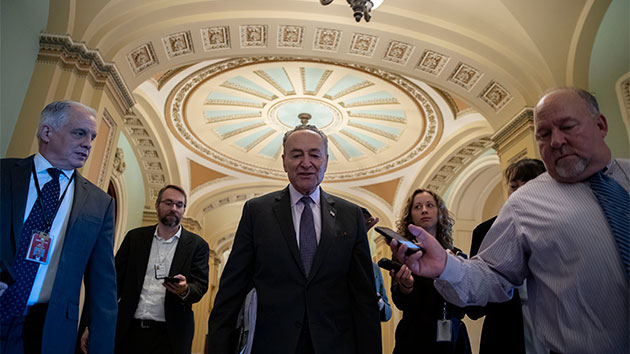 Alex Edelman/Getty Images(WASHINGTON) — The Capitol was nearly empty Saturday morning as the House and Senate came back into session, and White House and congressional aides continued to negotiate a way to end the government shutdown over President Trump’s demand for billions of dollars for a U.S.-Mexico border wall.

In a conference call with reporters, a senior administration official said the president continues to push $5 billion as his goal for current negotiations, although that may be the president's opening bid rather than a non-negotiable.

"We have continued to put forth what we think is an important expectation for these negotiations, which is $5 billion in border security," the senior administration official said.

A few lawmakers and leadership aides were seen wandering around the House and Senate floor, as leaders quickly opened up both chambers without any signs of progress since discussions on Friday night.

Roughly 25 percent of the federal government – and agencies including the State Department, IRS, Justice Department and Department of Homeland Security – shut down at midnight after Trump said he wouldn’t sign a funding bill that didn’t include $5 billion in funds for the construction of a wall.

Trump’s position seemed to harden after conservative allies on Capitol Hill and right-wing media began criticizing him this week. The president then prompted the House to add billions to a bipartisan Senate bill on Thursday and send the measure back to the Senate, where it lacked the support needed to clear the 60-vote threshold.

On Saturday, Democrats reiterated that they wouldn’t accept funding for the border wall, suggesting little progress had been made in preliminary discussions between congressional leadership and White House officials.

“President Trump, if you want to open the government, you must abandon the wall,” Senate Minority Leader Chuck Schumer, D-NY, said Saturday.

On Saturday, Trump had lunch with Vice President Mike Pence and a group of conservative House and Senate Republicans supportive of his border wall fight.

After the lunch, Pence made his way back to the Capitol for a meeting with Schumer, whose aide told ABC News he expects to get a readout of what was discussed at lunch.

The meeting between the two comes at the White House’s request, according to the aide in Schumer’s office.

Schumer intends to remind the vice president that any proposal with funding for the wall cannot pass the Senate, the aide said.

Trump tweeted that he was “working hard,” at the White House Saturday morning, canceling plans to travel to his Mar-a-Lago club in Florida for the holidays and hinting that “it could be a long stay” in Washington.

He said planned to have lunch Saturday with Vice President Mike Pence and a group of conservative House and Senate Republicans supportive of his border wall fight.

“The president refuses to compromise,” Democratic Whip Steny Hoyer, D-Maryland, told ABC News. “When you don’t have the votes, you need to compromise.”

Should Trump and congressional leaders fail to reach an agreement, Hoyer said Democrats were ready to pass a funding bill through the House when they take control of the chamber in January.

Much of the Capitol was stuck between that transition Saturday because of the shutdown. Boxes and Christmas decorations were stacked outside of offices that were scheduled to be swapped between Republican and Democratic House leaders before the shutdown.

House Speaker Paul Ryan was seen entering his leadership office Saturday morning with an overnight bag. The retiring speaker, who spends his nights in Washington in his office, had been evicted from his congressional office in the Longworth House Office Building.