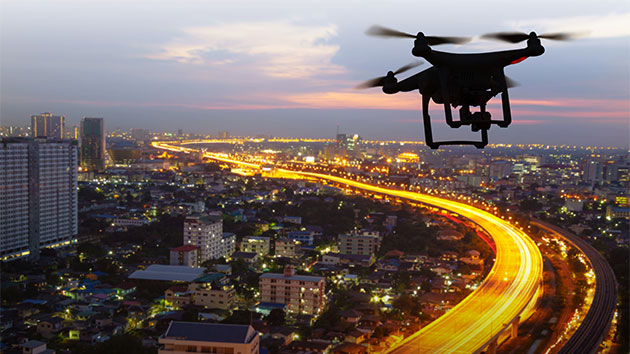 Naypong/iStock(NEW YORK) — With Christmas approaching, London’s Gatwick airport, one of the busiest in the U.K., was forced to shut down for a day this week after reports of two “rogue” drones flying above the airfield.

Drones have become an increasingly prominent nuisance in the skies as they have grown more accessible to the average consumer. As regulations, technologies and laws about flying drones evolve to governmental demands, new technologies have been developing to deal with drones that fly illegally. Some are already used and have been shown to be effective, while others are still in their experimental stages.

Here’s a look at some of the methods used for countering “rogue” drones.

It is possible to track down drones and jam the signals the drone uses to communicate with the pilot flying it. Australian firm DroneShield uses a “jammer” technology that can disrupt the signals that allow pilots to control and navigate their drones.

“Jammers are designed to disrupt a drone by blasting electromagnetic noise at radio frequencies that drones operate and transmit video at, and at a power level high enough to drown out any effective communication between the drone and its pilot,” DroneShield said in a blog post.

Unless the GPS system is also jammed, the drone will usually return to wherever it came from, which can help agencies track its source, according to DroneShield. And when the GPS is jammed, oftentimes the drone will just land in where it is at the moment, giving investigators an opportunity to investigate.

Radio-frequency jamming is the most effective solution to combating rogue drones, according to Darren Buxton, head of operations and revenue at U.K.-based Drone Defence Services Ltd.

“We have devices that scan the airwaves for the signature of a drone. Once it is detected, [we] then deploy and activate our protection system such as SkyFence,” he told ABC News.

The SkyFence technology, developed by Drone Defense, works like an invisible fence to block drones from entering protected airspaces, such as that above a prison compound in Guernsey, a British island located on the English Channel.

Another solution companies are offering is the “hunter” drone — a larger drone that can hunt for the rogue drone in the air. It’s also possible to deploy more than one hunter drone to catch rogue drones, and they shoot a net to capture the offending drone, after which they bring the rogue drone down to the ground safely.

Delft Dynamics is a Dutch company funded by a government grant that says it developed the hunter drones four years ago.

“It is a sort of cat-and-mouse play by which we follow another drone… and from a distance of 10 to 15 meters, we can shoot a net by air pressure, and with four rubber bullets we spread the net,” Arnout de Jong, CEO of Delft Dynamics, told ABC News. “The drone will be entangled in the net and [we] carry the drone away in that net.” And if the rogue drone is too fast, de Jong said they simply release more hunter drones.

Similar to Delft Dynamics, OpenWorks Engineering is a company that has developed a gun that shoots nets from the ground.

“They throw a large fishing net into the air which wraps up the drone, tangles up the propellers — doesn’t matter what kind of drone it is — and disables the drone,” said James Cross, director of OpenWorks Engineering. “As the drone falls to the ground, it deploys a parachute as well to also minimize the damage to the surrounding areas.”

This product is called the SkyWall, and it was once deployed to protect President Barack Obama during a visit to Berlin in 2016, the company said. The Skywall system, developed by the British company, looks a bit like a missile launcher and has been used by facilities across many other countries, the company said.

Birds of prey that hunt down drones

Birds of prey, such as eagles, have been trained to take down drones in the past. The Dutch police experimented with using birds by partnering with Guard From Above, a raptor-training security firm based in the Hague.

In a dramatic video shared by the Dutch police, you can see the birds deftly catching drones in mid-air. However, although it is a unique idea, the birds ultimately proved to be too expensive to train for the task, according to Dutch media.

Experts agree that an effective counter-drone strategy may have to draw on many of the methods above to be foolproof.

Broken shotgun with scratched serial number found in Lumber City
Tyrese says his “controversial” film ‘Rogue Hostage’ is “like ‘Die Hard’ inside of a grocery store”
Supreme Court: No green card for TPS holders after illegal entry
Avalanche’s Kadri offered in-person hearing following illegal check
Feel the need for speed: For its 35th anniversary, ‘Top Gun’ is flying back into theaters
Could the new Captain America be flying into Spider-Man’s neighborhood?