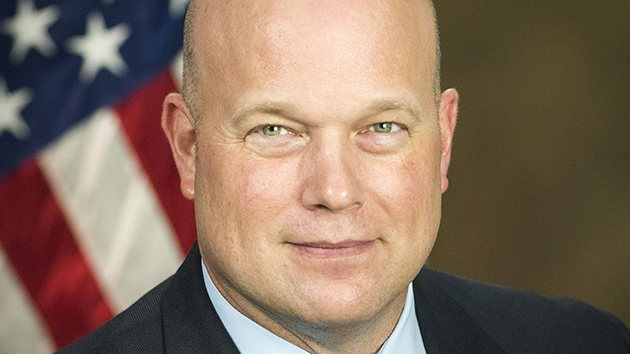 US Department of Justice
Posted on December 21, 2018 by ABC News

US Department of Justice(WASHINGTON) — Acting Attorney General Matthew Whitaker is not recusing himself from overseeing the Mueller investigation, even though a Justice Department ethics review determined that recusal would be appropriate, but not required, in his case.
Critics have complained that before taking the job as chief of staff to Attorney General Jeff Sessions, Whitaker frequently appeared on television making critical comments about the special counsel investigation, raising questions about his impartiality in overseeing the probe.
Whitaker’s reasoning was described in a letter to Senate leadership sent late Thursday. The letter, signed by Assistant Attorney General Stephen Boyd, explained that “if a recommendation [about recusal] were sought,” Justice Department ethics officials “would advise that the Acting Attorney General should recuse himself from supervision of the Special Counsel investigation," because a reasonable person with knowledge of relevant facts would "likely question the impartiality of the Acting Attorney General."
But the key phrase is: “if a recommendation were sought.” In considering whether he should seek an ethics review, Whitaker was briefed on what the results of such a review would be. Armed with the knowledge that if a review were ordered it would recommend recusal, he simply chose not to ask for one.
The letter to drew a sharp response from Senate Minority Leader Chuck Schumer who said in a statement, “It’s crystal clear that Department of Justice ethics officials believe Mr. Whitaker should recuse himself from supervision of the special counsel’s investigation. And despite this clear guidance, Mr. Whitaker has refused to do so."
Officials also looked at whether there were conflicts of interest under applicable rules of conduct, due to personal or political relationships with people substantially involved in "conduct that is the subject of the investigation or prosecution" or would be "directly affected by the outcome." The ethics officials did not find any requirement to recuse under that analysis.
But ultimate decision about whether to recuse, the Boyd letter states, rests with Whitaker himself.
The letter lays out seven reasons for Whitaker’s decision:
1) There is no actual conflict of interest
Ethics officials analyzed if Whitaker had any professional or personal relationships that would interfere with his impartiality in overseeing the investigation. They found none.
2) There is no precedent
Whitaker reasoned that because there was no precedent for recusal due to past remarks in the media, he did not want to create a precedent for recusal in his case, despite the fact that officials advised him they would recommend a recusal. His position was bolstered by one ethics official who, the Boyd letter states, described Whitaker’s case as a “close call” and that “credible arguments could be made either way.”
3) Prior analysis said no recusal required
The Boyd letter states that what was identified by an ethics official as the "most relevant" prior department analysis concluded that recusal was not necessary.
4) Whitaker hasn’t said anything bad about Mueller recently
It has been a while (16 months) since he's made any public remarks about the Mueller probe. The reasoning here seems to be the weight of his remarks fades with time.
5) Whitaker has said nice things about Mueller, too
The Boyd letter says Whitaker has described the special counsel as a “professional,” a “good man” and that “a man of Mueller’s stature would only go after legitimate targets.” The suggestion being that such statements would provide balance his criticisms of Mueller.
6) Whitaker was unaware of any reason to fire Mueller
The letter notes that because Whitaker reportedly told Sen. Lindsey Graham on Nov. 15, that he was not aware of any reason to fire Mueller, he does not need to recuse himself.
7) He is an experienced prosecutor
With five-and-a-half years as a U.S. Attorney under a previous administration and a year and a half as chief of staff to Attorney General Sessions before becoming Acting Attorney General, Whitaker does have significant experience in the Justice Department and the letter says he is “acquainted with the ethical duties of a prosecutor and is fully committed to following the law and the facts where they lead.”
The bottom line, as the letter states, is that “the ultimate decision about whether or not to recuse from a matter in a case such as this rests with the Acting Attorney General.”
Whitaker has decided he does not need to recuse himself. A formal recommendation from ethics officials on his past media comments would say he should recuse. But such a recommendation is not required and he does not appear eager to seek it.
Copyright © 2018, ABC Radio. All rights reserved.