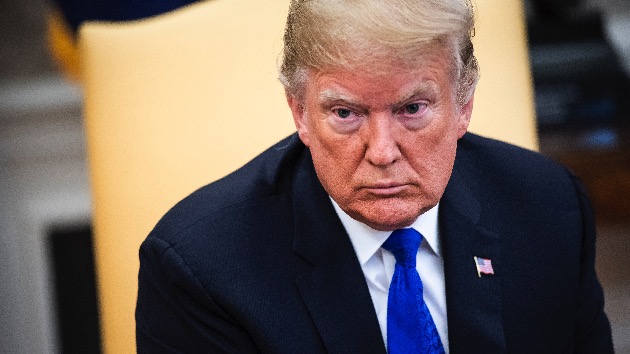 Jabin Botsford/The Washington Post via Getty Images(WASHINGTON) — Just hours from a Friday midnight deadline, President Donald Trump threatened a government shutdown in morning tweets, pushing hard for the Senate to pass $5 billion for his border wall as the House did Thursday.
"Shutdown today if Democrats do not vote for Border Security!" Trump tweeted days before the Christmas holiday.
The House bill includes $5.7 billion to construct a border wall, $7.8 billion for disaster relief and would fund the government until Feb. 8.
But the prospects of the same bill passing the Senate are far less likely because Democrats have pledged to defeat the divisive measure.
Trump called for Senate Majority Leader Mitch McConnell to wage "hard" fight, saying if Democrats don't vote for funding the wall, they would be to blame for a shutdown, despite his having said last week that he would be "proud" to take the blame for a shutdown over border security.
The president called for McConnell to use the "nuclear option," which would override a Senate rule that requires 60 votes to advance legislation and instead would allow a vote to proceed and a measure to pass with 51 votes, or a simple majority.
"Mitch, use the Nuclear Option and get it done!" Trump tweeted around 8 a.m.
McConnell has repeatedly refused to use the "nuclear option."
Trump said Democrats have called his wall proposal "old fashioned" but tweeted he knows technology "better than anyone."
"The fact is there is nothing else’s that will work, and that has been true for thousands of years," Trump said in a series of at least eight tweets.
Copyright © 2018, ABC Radio. All rights reserved.