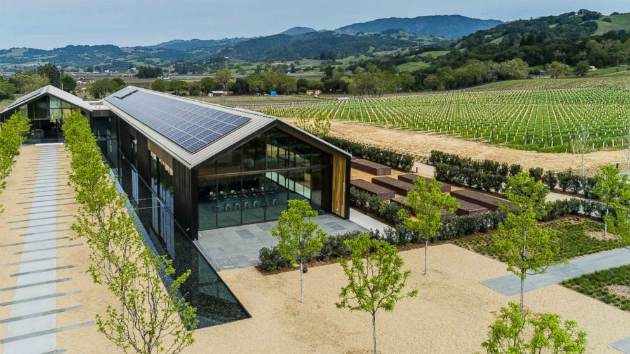 Silver Oak(NEW YORK) — Going green had become David Duncan’s mission.
For the last 15 years, Duncan, the president and CEO of Silver Oak Cellars, had feverishly researched how he could transform his family’s California wineries into sustainable stewards of the earth.
Silver Oak’s Cabernet Sauvignon had developed a loyal following among oenophiles and celebrities. Duncan, however, had bigger plans for the 46-year-old family business. In 2014, he approached his niece, Haley Duncan, a recent environmental studies college graduate, to help him accomplish a massive undertaking: to become the greenest winemaker in the world.
This year Silver Oak’s Alexander Valley winery was formally recognized as LEED Platinum certified by the U.S. Green Building Council (USGBC), which introduced the international green building rating system standard in 2000. LEED Platinum is the highest level a green building can achieve and one that requires a rigorous certification and review process. Silver Oak’s Napa Valley winery received its Platinum certification in July 2016.
“It was a major endeavor for the family,” David Duncan told ABC News. “No other winery had achieved this level of sustainability. We felt like it was important and the right thing to do.”
The Duncans have now become unofficial LEED ambassadors in the state, meeting with other vintners to explain how the process works and why they should follow Silver Oak’s lead.
“We’re making the best wines we ever have,” David Duncan said. “There’s pride among our employees that we achieved this unique status in the world.”
Nearly 70 percent of California wines are made in a certified sustainable winery, according to the California Sustainable Winegrowing Alliance, a nonprofit organization that was established in 2002 to inform and educate winemakers on how to adopt and implement sustainable business practices. The alliance started offering its own requirements and certification in 2010, working with a third party to audit submissions.
“A vast majority of the industry is embracing sustainability and using some sustainable practices,” Allison Jordan, executive director of the alliance, told ABC News. “It’s become a hyper competitive industry. California is the fourth largest wine growing region in the world. We’re a pretty significant player.”
For the Duncans, the process to become LEED Platinum certified took years. At the new Alexander Valley location, which opened this spring, recycled Levi denim jeans provide the insulation. More than 2,500 solar panels adorn the buildings. The floors come from naturally felled oak trees. Stormwater is preserved and diverted into a pond for landscaping. A membrane bioreactor recycles water. Native plants replace grass on the 113-acre estate.
“Every building material had to be screened for 800 toxic chemicals that are commonly used as construction materials,” Haley Duncan told ABC News. “We’re trying to do things better.”
David Duncan would not disclose how much it cost to implement the measures, only saying the investment would likely pay off in three years. Reducing the wineries’ carbon footprint was important yet everything “needed to make business sense,” he said.
“We wouldn’t go green at any cost,” he explained. “We make 100,000 cases of wine a year — we’re quite small compared to our competitors.”
In the U.S. there are nearly 33,000 commercial projects that have earned LEED certification, according to Rhiannon Jacobsen, a spokesperson for USGBC. Another 34,000 are in the process of obtaining certification.
“Silver Oaks LEED certification represents a commitment to making the world a better, healthier place,” said Jacobsen.
David Glancy, the founder and CEO of the San Francisco Wine School, applauds Silver Oak’s environmental practices, pointing out that employees deal with fewer and less toxic chemicals and the long-term balance of the soil and vines improve.
But “going green by no means guarantees better wine,” he told ABC News. “Some retailers and sommeliers will share the story of the winery’s sustainable programs to help them sell wine to consumers. If the consumer likes the wine, this is one more reason to be a repeat customer.”
Haley Duncan said more wine lovers are coming to Silver Oak’s tasting rooms after hearing about the company’s sustainability efforts.
“We’ve integrated it into our tours and made it a point to share with our guests,” she said. “David and I are all about sharing what we have learned.”
Added David, “It doesn’t have to be a big investment. It’s mostly a change of practices. What we have done in the vineyards affects the quality of the wine.”
Copyright © 2018, ABC Radio. All rights reserved.