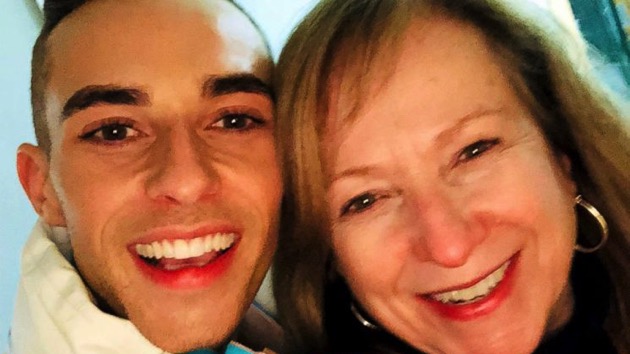 Adam Rippon and mom, Kelly, smile proudly as he displays his bronze medal from the 2018 Winter Olympics. (Courtesy Adam Rippon)
Posted on December 21, 2018 by ABC News

Adam Rippon and mom, Kelly, smile proudly as he displays his bronze medal from the 2018 Winter Olympics. (Courtesy Adam Rippon) (NEW YORK) — Adam Rippon has had quite a year.
In 2018 alone, the 29-year-old figure skater from Scranton, Pennsylvania, made history and became the first openly gay U.S. athlete to medal at the Olympic Games; competed and won ABC's Dancing With The Stars; and became a role model to many for his ability to combine humor, grace and style — inside and outside the skating rink.
"There’s nothing like it," Rippon told GMA about the feeling he gets when he skates. The athlete has burst into the pop culture scene after stealing the spotlight during the Olympics.
Even though Adam Rippon’s life may look picture-perfect now, it took a lot of hard work and dedication (and a couple of faux-pas) to get there.
We took a trip down memory lane with Rippon to learn more about his journey to success and the lessons he's picked up along the way.
1. You stop growing when you stop learning
"I look like that one episode from Seinfeld where Jerry has to wear the puffy pirate shirt," Rippon remarked. This photo is from one of his first skating competitions.
The Pennsylvania native picked up his first ice skates when he was 10 years old.
"I remember those feelings of it being new, it all being fresh and loving and enjoying what I was doing."
Rippon urged others to embrace the feeling you get when you master a new skill.
"Don’t ever lose that, because you stop growing when you stop learning," he said.
2. Fear is your secret weapon
Just this past year, Rippon was one of three male figure skaters selected to represent the United States at the Olympic Games in South Korea.
Rippon called the Olympic experience both "amazing" and "awful."
"I was ready, I was prepared, but there’s always those moments of feeling so nervous," he said.
He was filled with confidence and fear, adding that at one point he wanted to hide in the bathroom before a competitions and "lock the door … maybe [the judges] will move right past me and not even notice."
"If you take that [fear], it can be sort of your secret weapon," he added.
Rippon won a bronze medal with his team in figure skating, making history as the first openly gay U.S. athlete to medal at any Winter Olympics.
He announced his retirement from competitive skating in November after nearly 10 years on the ice.
"Looking back at this photo … it’s a way for me to reconnect with skating in a way where it’s just for pure enjoyment," Rippon said.
3. Don't put a limit on your dreams
Family is important to Rippon. His mother, Kelly, is the one who introduced him to skating and the two are still close to this day.
"The best lesson my mom ever taught me was to always dream big and always think big."
Rippon said that his mom always encouraged him that no goal was too big to achieve.
"I never thought it would be impossible to go to the Olympics. I never thought it would be impossible to do any of the things I’ve gotten to do because my mom always taught me not to put a limit on what I was capable of," he said.
4. Embrace holiday traditions
Rippon may be able to take a selfie like a pro now, but even he has a few "embarrassing" family photos from his childhood.
This particular one of 5-year-old Rippon with his younger brothers brings a smile to his face.
"This picture kind of shows one of the traditions we had growing up and that was we always wanted to take a holiday photo," Rippon said.
As part of tradition, "everyone needs a matching outfit," he said of this mall photo shoot.
Although getting the perfect shot could be "stressful" at times, Rippon remembers these moments with his family fondly.
"Looking back, it’s probably some of the most fun and funniest memories I have from the holidays," he added.
5. Be grateful for your success
Since the Olympic Games, Rippon has embarked on many different adventures outside the rink — from winning Dancing With The Stars to sponsorship deals with brands like VapoCool.
"When I see this [photo], I see a businessman."
Like any good businessman, Rippon said he makes sure to work with companies whose products he would use himself.
As an athlete who could rarely take a sick day and also had to deal with random drug tests, Rippon said VapoCool products were some of the only medicines he trusted to use throughout his career.
"Take all the things that helped make your success possible; be thankful and be grateful for them," he said.
If you continue to have that mindset, "it will lead you to really great things in the future," Rippon said.
Copyright © 2018, ABC Radio. All rights reserved.