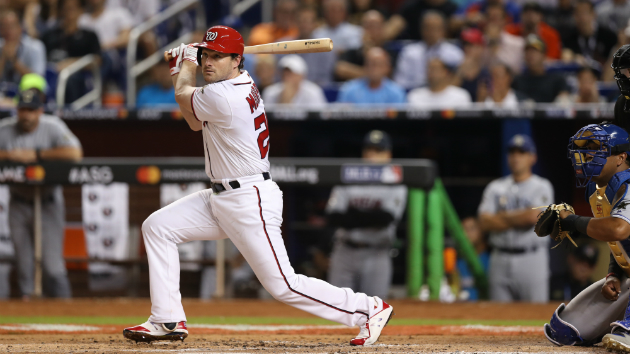 Allen Kee / ESPN Images(NEW YORK) — It appears free agent infielder Daniel Murphy is heading out west.
Multiple reports say the 33-year-old has agreed to a two-year, $24 million deal with the Colorado Rockies.
While Murphy has played the majority of his career at second base, he is reportedly expected to play mostly at first for the Rockies.
Murphy was drafted by the New York Mets in 2006 and made his debut with the team two years later. He remained with New York through the 2015 season, after which he opted for free agency and was signed by the Washington Nationals. He was then traded to the Chicago Cubs this past August and elected to become a free agent at the end of the 2018 season.
Playing for both the Nationals and Cubs this past season, Murphy racked up a .299 batting average with 12 home runs and 42 RBIs.
Copyright © 2018, ABC Radio. All rights reserved.