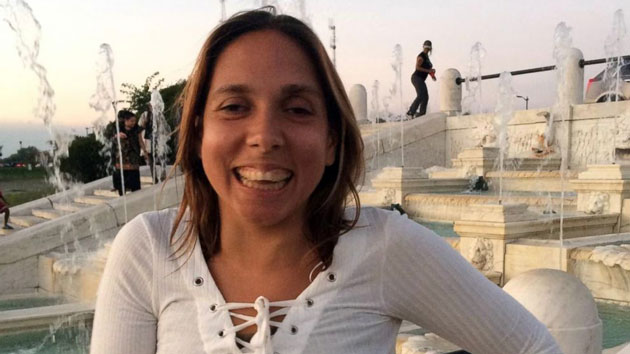 Courtesy: Carlos Valpeoz(NEW YORK) — The desperate search for a visually impaired Michigan woman missing in Peru has shifted into "red alert" status with police fanning out across the country, combing towns and Incan ruins, officials said.
Carla Valpeoz, 35, of Detroit, hasn't been heard from since Dec. 12 and police said she was last spotted entering the ancient Incan ruins at the Pisac Archaeological Park in the South American country's Sacred Valley region.
"We are committed to the Sacred Valley of the Incas. We have teams on all fronts searching for her at the moment throughout the area and we have dedicated our entire force to find this person because we are very worried," Col. Manual Mar of the Peru national police said at a news conference Wednesday night.
Mar said police have widened the search for Valpeoz from Cusco, where she spent the night in a hostel on Dec. 11, to Pisac, about 21 miles east of Cusco, where she was spotted on Dec. 12 walking into the Incan ruins there.
"We cannot stress how urgent it is to locate my sister because a lot of time has passed," Valpeoz's brother, Carlos Valpeoz of Brooklyn, New York, told ABC News on Thursday.
He said his father, Carlos Valpeoz Sr., traveled to Peru and is actively helping police search for her. The U.S. State Department is also helping in the search, officials said.
Mar said police are searching the Arequipa region of Peru, more than 300 miles south of Cusco, and in Puerto Maldonado and Puno, more than 240 miles to the east of Cusco.
"We have deployed the red alert to start the search in all of the police stations of Cusco as well as Arequipa, Puerto Maldonado and Puno," Mar said.
Carlos Valpeoz said people have called his family with unconfirmed tips of sightings of his sister in Arequipa, Puerto, Maldanodo, Puna and another town in the Sacred Valley called Urubamba. He said those tips were passed on to police.
Valpeoz, who walks with a white cane, was reported missing to police by a friend on Dec. 15, when she failed to show up at the Jorge Chávez International Airport in Lima to catch a flight back to Michigan.
Mar said she spent the night of Dec. 11 at the Pariwana Hostel in Cusco and that police have obtained surveillance video of her leaving the hostel in a taxi at 8:45 a.m. on Dec. 12.
He said police have interviewed the taxi driver, who said he took Valpeoz to a transportation hub in Cusco, where she took a second car to Pisac.
"So this is the info we have at the moment," Mar said. "At this moment we have moved our teams to Pisac with high-mountain personnel and we are sweeping all the sanctuary and the perimeter in Pisac."
Carlos Valpeoz told ABC News that his sister flew to Peru the first week of December to attend a friend's wedding. He said the day before she vanished she visited the famous Inca ruins of Machu Picchu, where she connected with a tour group that guided her to the highest peak overlooking the ruins.
Carla Valpeoz is an advocate for the visually-impaired and author of the travel book "Visionless Adventures." She also worked as a tour guide at the Arab American National Museum in the Detroit, Michigan, suburb of Dearborn.
In a YouTube video she posted, she said she was diagnosed with optic nerve atrophy when she was 10 and has been gradually going blind ever since.
Carlos Valpeoz said his sister is an avid traveler, who often takes trips on her own. She visited Egypt, Yemen, taught English in Papua New Guinea and traveled extensively throughout Central and South America.
"So it's my belief that she wanted to see and experience as much as she could before she couldn't see anymore. I think that is a driving force for her. She wanted to travel as much as she could whether with friends or independently," he said.
Copyright © 2018, ABC Radio. All rights reserved.