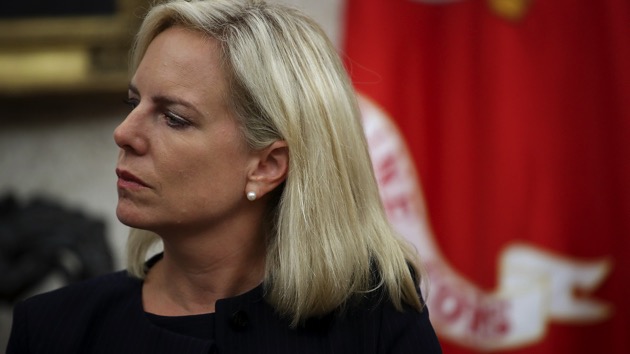 Win McNamee/Getty Images(WASHINGTON) — Amid outraged questioning from Democratic lawmakers over the death of a 7-year-old migrant girl apprehended at the southern border, Homeland Security Secretary Kirstjen Nielsen said Thursday she could not provide a specific number of how many other people might have died in U.S. government custody.
“I don’t have an exact figure,” Nielsen said testifying before the House Judiciary Committee, about two weeks after the death of a 7-year-old girl Jaklin Caal Maquin from Guatemala who was taken into U.S. custody after she and her father were taken into custody near the New Mexico border.
"I work every day as do the men and women of DHS to try to limit the perils of that journey," Neilsen said. "The journey is dangerous and smugglers are not humanitarians. Our system should not incentivize that type of journey and use of criminals to get here," she added.
"One death is too many," she said.
But multiple Democrats pressed Nielsen on the question of how many have died, including news reports of other deaths in DHS custody. Two members asked Nielsen about reports of 52-year-old Gerardo Cruz, a father of six, who died in March after 25 days in CBP custody, an ABC News investigation found.
In one notably testy exchange, Democratic Rep. David Cicilline of Rhode Island pressed Nielsen for at least an estimate.
“Madame Secretary, did I understand you correctly to say that as you sit here today, you do not know how many human beings have died while in the custody of the department that you lead?" Cicilline asked. "And in preparation for today’s hearing, you didn’t ascertain that number, that you don’t know it today?”
Pushed by Rep. Hank Johnson, a Georgia Democrat, for an “approximate number,” Nielsen said she would not “guess under oath.”
Nielsen said she would get back to Congress with an exact number, but said she could give the number of migrants who were rescued by border patrol in remote border areas — about 4,200, she offered.
Later, Iowa Republican Rep. Steve King, known for his hard-line stances on immigration, asked Nielsen for an estimate on the number of people who die on their way through South and Central America, before they cross the border into the U.S.
“Thousands and thousands and thousands,” Nielsen said without hesitation.
Nielsen also said the department’s inspector general is in the midst of investigating other cases, in addition to the death of Maquin. Maquin was apprehended in a section of New Mexico desert on Dec. 6 around 9 p.m. Though her father signed a form in English that she was not currently sick, eight hours later, by the time she was put on a bus headed to a border patrol station about 90 miles away, her father reported she was vomiting, DHS officials said. She died at a children’s hospital of septic shock and dehydration that morning.
According to Rep. Pramila Jayapal, a Democrat from Washington state, there have been 12 deaths during Nielsen’s tenure as DHS secretary, including a suicide in a detention center south of her Jayapal's district. She asked Nielsen for a commitment that there would be no further deaths.
“Our goal is always to take care of those in our custody,” Nielsen said. “You have my commitment to ensure that all of our detention centers take good care of those in our care.”
Lawmakers who visited the station where Maquin was brought before she was airlifted to a hospital in Texas were sharply critical of the facilities they saw and the resources Customs and Border Protection agents had available for health care, they said in a news conference and in interviews with ABC News after the visit.
“What I’ve found here is there are some really serious systemic obstacles, and problems, and failures in the system, to provide the care that a child so lovingly deserves when they're in our custody,” Rep. Raul Ruiz, D-Calif., said outside the Lordsburg facility.
Ruiz, who has a medical degree from Harvard University and worked as an emergency room doctor, said he was concerned that Maquin was not provided a bed, but was instead laid on a "hard, flat table," and border patrol agents didn't have cell phone service or broadband internet to communicate with paramedics.
In an interview after the visit, he emphasized the importance of getting information from CBP and DHS to the public.
“It is uncommon to have deaths while in custody, that is very, very rare,” he said. “However, the illnesses, the lack of care, and the hardships the migrants face while in custody — that is a day to day phenomenon and I do think it's important the American people see how the migrants are treated, without any of the standards of care we can hold ourselves accountable to as a nation."
Chairman-elect of the caucus, Rep. Joaquin Castro, said a range of systemic failures in Maquin’s case and at facilities around the border should lead to Customs and Border Protection Commissioner Kevin McAleenan’s resignation. McAleenan testified before Congress days after Maquin's death, which Nielsen confirmed her office knew about on Dec. 8 but didn't disclose the death in his hearing.
Maquin’s death, which members of Congress said should be investigated independently, has not been the only death of a child to occur after being detained by CBP.
In August, a mother filed suit against a detention center because of the death of her toddler, who died from a respiratory infection more than two months after her and her mother were detained.
According to a claim filed by Yazmin Juarez, whose young daughter was named Mariee, the little girl contracted the sickness in the immigration detention facility.
Human Rights Watch, which reviewed the 52 publicly available death reports of the 81 detainees who have died in detention since 2010, determined in June that almost half of those deaths were linked to substandard care.
Copyright © 2018, ABC Radio. All rights reserved.

Fan’s Twitter plea for “national security protection” for nearly 100-year-old Betty White goes viral
Chicago’s police union chief urges officers to defy city’s vaccine mandate
Trump must give videotaped deposition in protest lawsuit, judge orders
In 2020, 62% of police deaths were caused by COVID: One officer’s story
Democrats will reach a deal on Biden’s agenda: Hillary Clinton on ‘The View’
Kyrsten Sinema has rankled fellow Democrats, but will it matter in her home state of Arizona?