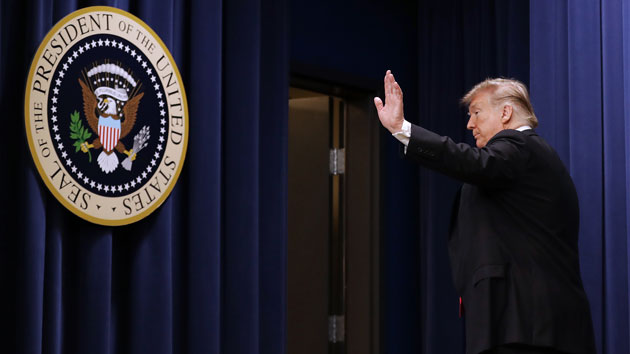 Chip Somodevilla/Getty Images(WASHINGTON) — President Donald Trump said Friday “the chances are probably very good” of a partial government shutdown at midnight — the deadline for Congress to pass a funding bill he insists must include money for his proposed border wall.

And then, after a procedural vote that took 5 hours and eight minutes, the Senate voted to advance a measure that would fund the government and include the president's border wall and billions in disaster relief funding. However, it did not get the 60 votes needed for final passage and indicates the government is still headed for a shutdown.

Later, Sen. John Cornyn, R-Texas, told reporters not to expect any more votes Friday night.
Earlier in the day, Trump continued to try to shift the blame to Democrats after saying last week he would be "proud" to shut down the government to get more border security.
“It's up to the Democrats as to whether or not we have a shutdown tonight,” Trump said at a bill signing ceremony in the Oval Office. “I hope we don't, but we are totally prepared for a very long shut down.”
Trump spoke after a last-minute meeting at the White House with Senate Majority Leader Mitch McConnell and other Republicans to rally them in a renewed fight for his proposed border wall. But shortly afterward, Senate Republicans were struggling to get enough votes to move to a final vote on a House bill that included some $5.7 billion in wall funding as well as money to keep the government running.
In an unusual move, Republican leaders were holding the vote open for several hours while senators who had already left for the holidays returned to Washington.
The Senate had passed a stopgap spending bill on Wednesday that didn't include Trump's border wall funding and seemed to have pushed a government shutdown down the road until February. But after pushback from conservative circles, Trump informed GOP House leader he wouldn't sign a bill that came to his desk without the money for the wall.
It was unclear what path Republicans, who control the House and the Senate, would take next — caught between the president's demand on the border wall and needing enough Democratic votes to pass a spending bill to keep the government running.

"I hope Senate Democrats will work with the White House on an agreement that can pass both houses of Congress and receive the president's signature," McConnell said from the Senate floor after the Friday evening vote. "So, colleagues, when an agreement is reached, it will receive a vote here on the Senate floor."
Senate Minority Leader Chuck Schumer acknowledged an appetite for continued discussions, but said there is no path forward for the House bill.
"We are willing to continue discussions on those proposals with the leader, the president, the speaker of the House and the leader of the House. All five are necessary to get something done," Schumer said.
"The only path forward is to a bill that has an agreement between the president and both houses of Congress."
Earlier Friday, the president threatened a government shutdown in morning tweets, pushing hard for the Senate to pass funding for his border wall as the House did Thursday.
Trump's effort to shift blame to Democrats began early Friday.
"The Democrats now own the shutdown!" Trump tweeted mid-morning, the latest in a series of almost a dozen tweets.
The House bill sent to the Senate includes $5.7 billion to construct a border wall, $7.8 billion for disaster relief and would fund the government until Feb. 8.
Senate Minority Leader Chuck Schumer was ready to respond.
"You own the shutdown—your own words," Schumer tweeted. "The Senate UNANIMOUSLY passed a bipartisan solution to avoid a shutdown. Then you threw another temper tantrum and convinced the House to ignore that compromise."
In other morning tweets Friday, Trump called for McConnell to wage a "hard" fight, saying the wall was the only way to secure the border.
The president called for McConnell to use the "nuclear option," which would override Senate rules that require 60 votes to stop a filibuster and instead would allow a vote to proceed and a measure to pass with just 51 votes or a simple majority.
"Mitch, use the Nuclear Option and get it done!" Trump tweeted.
McConnell has repeatedly refused to use the "nuclear option" and a spokesman told ABC News Friday there were not enough votes to pursue it.
Trump also said Democrats have called his wall proposal "old fashioned" but tweeted he knows technology "better than anyone."
"The fact is there is nothing else’s that will work, and that has been true for thousands of years," Trump said in a series of at least eight tweets.
If a government shutdown happens, it would look different from previous ones, mostly because Congress has already funded about 75 percent of the federal government. But even a partial government shutdown could impact hundreds of thousands of federal employees.