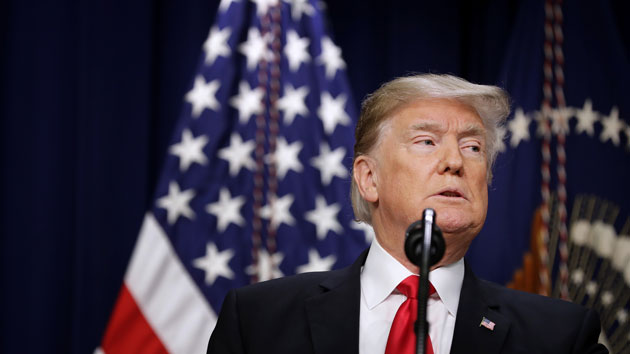 Chip Somodevilla/Getty Images(WASHINGTON) — President Donald Trump is firing back at one of his closest allies on Capitol Hill, Republican Sen. Lindsey Graham, who has vocally led the bipartisan outrage over Trump's decision to withdraw all U.S. forces and diplomatic personnel from Syria.
While the president claimed victory over the Islamic State has been won, Graham is among the many experts, lawmakers and U.S. allies who have asserted that the fight is not over and now is the wrong time to pull back and give U.S. adversaries like Iran, Russia and the regime of Bashar al Assad an opening.
Included on that list, according to the senator, are Trump's own top advisers, like National Security Adviser John Bolton and Defense Secretary James Mattis: "This decision did not come based on advice from his national security team. It came from the president himself."
Secretary of State Mike Pompeo denied not being involved in the decision, telling conservative radio host Laura Ingraham the decision "was made with lots of consultation between all the senior-level officials, including myself, with the president."
"I don't know how this decision was made. It literally came out of left field. It has rattled the world," Graham added Thursday, warning that withdrawal would mean the return of terror groups like ISIS, which rose from the ashes of the U.S. war in Iraq and increased threats to the U.S. homeland: "We have two choices to fight this war, in their backyard or in our backyard."
But Trump dismissed those arguments, again saying the decision would save U.S. lives and billions of dollars.

So hard to believe that Lindsey Graham would be against saving soldier lives & billions of $$$. Why are we fighting for our enemy, Syria, by staying & killing ISIS for them, Russia, Iran & other locals? Time to focus on our Country & bring our youth back home where they belong!

He also said that the U.S. fight against ISIS has only helped the Assad regime and its backers, Iran and Russia, suggesting that withdrawal will make things more difficult for them.
"Why are we fighting for our enemy, Syria, by staying & killing ISIS for them, Russia, Iran & other locals?" Trump tweeted.
But officials from the Pentagon and State Department have previously said that's not true.
The administration's strategy had been that the U.S. presence in Syria would help permanently eliminate a foothold for ISIS to launch terror attacks in the region and beyond, including in Europe. It also gives the U.S. leverage to get Iranian-commanded forces out of Syria and help push for a political settlement to end the civil war. The administration has made pushing back on Iranian influence in the region a chief priority, especially to help defend U.S. allies like Israel and Saudi Arabia.
"I can't explain this decision," Graham said, sounding exasperated. "But I can promise this — that if you follow through with this, everything that happened in Iraq is going to happen in Syria. It's going to be worse, not better."
The effects would also reverberate across the globe, he argued, with the Taliban using it as leverage to get the U.S. out of Afghanistan, North Korea taking it as a sign of weakness in nuclear negotiations and Russia taking it as a greenlight for its own malicious activities.
"They're ecstatic," Graham said of U.S. adversaries. "The only reason they're not dancing in the aisles in Tehran and ISIS camps is they just don't believe in dancing. This is a big gift to them, and this is a devastating decision for our allies."
But senators can do little to stop the commander-in-chief from this decision, beyond passing resolutions to condemn it and urge him to change course. While Graham said the decision was "surrender," he conceded Congress had little power: "He has every right to make that decision, but we're urging on him to reconsider."
Trump said earlier in the day that no one should be surprised by the decision, given his long history of calling for the U.S. to stop spending money on American presences overseas, especially in the Middle East.

Getting out of Syria was no surprise. I’ve been campaigning on it for years, and six months ago, when I very publicly wanted to do it, I agreed to stay longer. Russia, Iran, Syria & others are the local enemy of ISIS. We were doing there work. Time to come home & rebuild. #MAGA