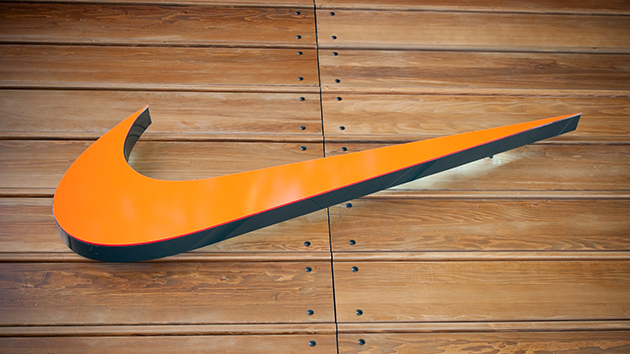 code6d/iStock(NEW YORK) — Nike stock climbed higher Friday after news that the company blew through expectations for second-quarter sales, validating the company's controversial Colin Kaepernick ad campaign that was released during that period.
The sportswear giant revealed its "Just Do It" anniversary campaign during its second quarter, which ended on Nov. 30. The campaign starred former San Francisco 49ers quarterback Colin Kaepernick, and quickly sparked both praise and criticism. Sales rose, however, with the company reporting a 10 percent jump in income to $847 million, driven primarily by strong revenue growth.
Nike stock ended the day 7.2 percent higher at $72.37 on a day that most stocks traded precipitously lower. The Dow Jones Industrial Average had its worst week in 10 years, closing at 22,445.37, a 6.9 percent decrease for the week.
"It looks like a real rebuke for folks who said, 'We’ll boycott Nike,'" University of Michigan business school professor Jerry Davis told ABC News. "It turns out Democrats buy a lot more sneakers than Republicans. The demo that is willing to spend $200 on Nike sneakers is not the demo that’s going to boycott them because of Kaepernick."
Davis was referring to a quote attributed to Michael Jordan on staying clear of politics: “Republicans buy shoes, too.” There's debate over whether he actually said it, but it is often quoted by marketing experts as a shorthand to explain the era in which both corporations and pitchmen stayed out of politics. In the past decade, however, the tide has swung as millennials have expected more companies to take a position on social and political issues, experts say.
"I believe the consumer wants brands to take a stand on social issues," Matt Powell, senior sports industry advisor for market research firm The NPD Group, told ABC News. "The core consumer for Nike is a teen male, it's likely they were going to respond positively. As opposed to a decade ago, a brand has to be transparent."
When Dick's Sporting Goods banned sales of assault-style guns after the Parkland, Florida shooting, it was similarly threatened with boycotts.
Powell tweeted the news, and for every 100 people who reacted positively, only one reacted negatively, he said. "Only one person said, 'I won’t buy anything from them in response to their stance.' There certainly seemed to be a lot of support," he said.
"A decade ago, conventional wisdom was brands kept that kind of view quiet, and now brands are forced to take a position," Powell added.
Davis attributed the shift to corporations taking cultural or political stances at least in part due to the rise of social media and the detailed data it provides about customers.
"Companies that live and die by their brands like Nike are doing much more tracking," Davis said.
"They've got a very good handle on who their consumers are and they have a much stronger sense" of how people will react, he added. "There is no neutral ground anymore."
A decade or two ago, brands relied on in-person focus groups, but now social media allows brands to monitor customers minute by minute, Davis said. "Nike has such a strong sense of who their consumers are."
In fact, Nike launched a direct-to-consumer strategy last year, pivoting from its past marketing toward retailers.
“Amid an increasingly dynamic macro-environment, what is certain is that Nike's execution of the consumer direct offense is driving consistently strong growth across our diverse, global portfolio,” said Andy Campion, executive vice president and chief financial officer of Nike, Inc., in a company statement. “As we continue to invest in digital transformation, we are driving consumer-centric disruption in our industry and unlocking new opportunities for growth.”
The speed at which social movements affect corporate behavior has also been compressed due to social media. In the late 1970s, a scandal over Nestle's practices of aggressively marketing formula in the developing world prompted a global boycott that lasted from 1977 to 1984.
By contrast, in February, when a campaign to boycott the National Rifle Association launched after the Parkland massacre, Delta Airlines was among many other brands to drop their discounts for NRA members within 48 hours.
"In two days. That's never happened in history," Davis said. "The Nestle boycott took seven years to take effect."
Copyright © 2018, ABC Radio. All rights reserved.