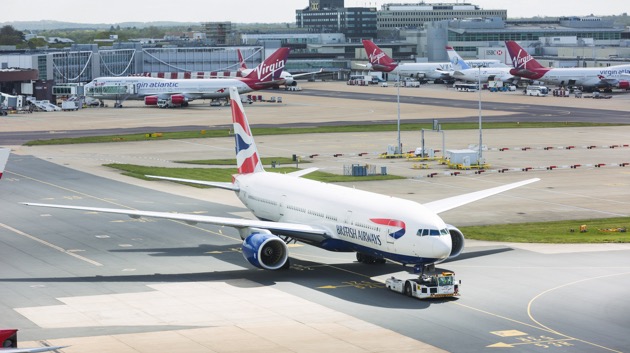 william87/iStock(LONDON) — London's Gatwick Airport had a serious drone problem Thursday, but as of Friday morning, it is back to being operational.
The airport was shut down at 9:03 p.m. on Wednesday due to reports of two drones flying over the airfield, the airport said in a statement. Despite a brief reopening in the early morning hours, the airport remained closed throughout the day Thursday.
Airport officials announced just after 6 a.m. Friday that the runway was open again and "a limited number of aircraft are scheduled for departure and arrival." Sussex police told ABC News they had yet to find the drone operator who was causing the shutdown, but the last drone sighting was just before 10 p.m. Thursday.
The airport, U.K.'s second largest, was closed for about 26 hours straight.
"Gatwick's runway will remain closed and all flights are cancelled for the rest of the evening because of continued drone sightings in and around the airfield," Gatwick Airport said in a statement at about 10 p.m. Thursday.
Sussex Police called the flying of the drones over the airfield "a deliberate act," but said there was no indication the drones were terror-related.
The airport continued to advise passengers to check on their flights for statuses. All told, officials said about 50 drone sightings were reported.
"We advise everyone flying from Gatwick, or collecting someone from the airport, Thursday 20th December, to check the status of their flight," the airport wrote.
The airport said "a number" of flights were diverted to other airports and airlines were "working to provide affected passengers with hotel accommodation or transport passengers landing at other airports to Gatwick by other means."
There were 760 flights cancelled on Thursday, according to an airport official.
There were no flights landing or taking off for about six hours — from 9:03 p.m. to 3:01 a.m. — and Gatwick announced it was "working, with the airport community, to catch up on the flight schedule."
That optimism was short-lived, as just 44 minutes later the airport announced another drone had been sighted and the airfield was again closed. It would never reopen.
"We apologise to any affected passengers for this inconvenience but the safety of our passengers and all staff is our number one priority," the airport said in a statement.
A joint search was being carried out by Sussex Police and the airport for the operators of the drones, authorities said.
"I've got officers not only in the terminals and on the airfields looking for the drone and the drone operator, but I've got resources from Surrey and Sussex right the way across the outside of Gatwick trying to identify who's operating this drone," Sussex Police Superintendent Justin Burtenshaw said. "It's been going on for 10 hours now and I'm absolutely certain this is a deliberate act to disrupt the airfield."
An Aeromexico flight may have been struck by a drone just a week ago. The flight landed in Tijuana without issue, but authorities were investigating what caused a large gash in the plane's nose.
Gatwick Airport, located about 30 miles south of London, is the second-busiest airport in the U.K., after London's Heathrow Airport. It is the eighth-busiest airport in Europe, according to aviation site anna.aero.
Thursday was expected to be one of the busiest travel days of the year, as people head home for the Christmas holidays. U.S. airlines expected to carry 45.7 million passengers from Thursday through Jan. 6, according to Airlines for America.
Copyright © 2018, ABC Radio. All rights reserved.