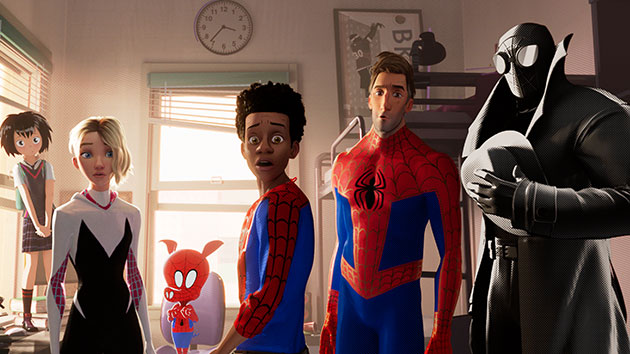 Sony Pictures Animation(NEW YORK) — Nothing says Christmas more than Spider-Man! Okay, that's a stretch, but the folks behind the #1 box office hit Spider-Man: Into the Spider-Verse are milking Yuletide cheer for all its worth with the release of the EP A Very Spidey Christmas.

The five-song album features the films stars, Shameik Moore and Jake Johnson — who voice Miles Morales and Peter Parker/Spider-Man, respectively — each performing a single song. But the highlight has got to be Chris Pine's performance of "Spidey-Bells (A Hero's Lament)." Even though Pine voices a version of Spider-Man that's only briefly in the film — no spoilers, please — his increasingly more deranged performance of the song is a lot of fun, especially since it's clear that he's having fun with it, too.

"Why did I agree/To do this stupid song?/I have a degree in chemical engineering/I thought it would be fun to show this side of me/Now I fear it lacks artistic integrity," Pine's Spidey laments.

Pine also performs "Up on the House Top" for the EP. The Lonely Island's Jorma Taccone, who voices the Green Goblin in Into the Spider-Verse, contributes a spoken word piece as well.

Spider-Man: Into the Spider Verse — A Very Spidey Christmas is available now from the usual digital outlets. Here's the track listing: