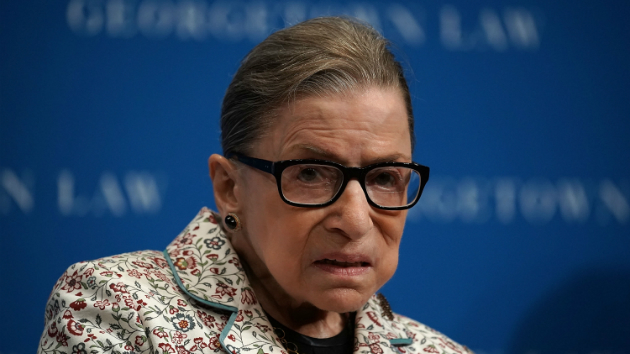 Alex Wong/Getty Images(WASHINGTON) — Supreme Court Justice Ruth Bader Ginsburg had malignant nodules removed from her lung in a New York hospital and is said to be "resting comfortably."
The 85-year-old justice underwent a pulmonary lobectomy on Friday at Memorial Sloan Kettering Cancer Center in Manhattan, the Supreme Court reported.
The two nodules were discovered on her left lung "incidentally" when she had tests performed after she fractured ribs following a fall in November.
The thoracic surgeon reported that the nodules were tested after they were removed and were "found to be malignant on initial pathology evaluation."
"Post-surgery, there was no evidence of any remaining disease. Scans performed before surgery indicated no evidence of disease elsewhere in the body. Currently, no further treatment is planned," the Supreme Court statement reads.
Ginsburg was hospitalized for observation and treatment after fracturing three ribs following a fall in her office on Nov. 7.
Despite being diagnosed with colon cancer in 1999 and pancreatic cancer in 2009, Ginsburg never missed a day of oral arguments due to medical treatment until 2014. She was briefly hospitalized in November 2014 after doctors discovered a blockage in her left coronary artery.
Copyright © 2018, ABC Radio. All rights reserved.