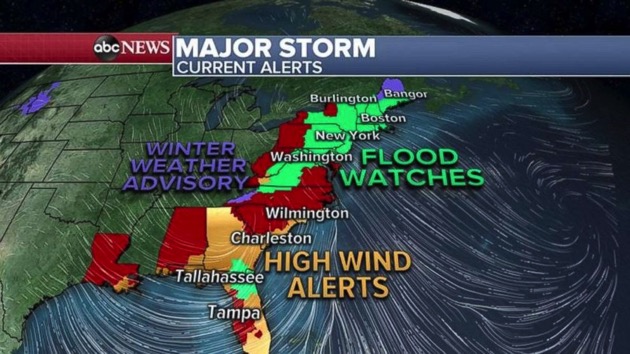 ABC News(NEW YORK) — A southern storm brought two confirmed tornadoes to Florida, record rainfall in Orlando and damage to Georgia and the Carolinas on Thursday. Now the storm continues to inch its way north during the busiest travel days of the holiday season.

Wind and flood alerts stretch from Florida to Maine Friday afternoon as the major storm system moves east.
The rain will end soon in the South, but wind gusts may still reach 30 to 50 mph.
In the Northeast, rain and gusty winds are wreaking havoc on the roads and in the air.
By Friday night, heavy rain will still be falling from New York City to Maine, including Boston.
Snow showers are expected for the Appalachian Mountains and into the eastern Great Lakes.
The storm will move into Canada by Saturday morning with just some lingering snow and rain showers in New England.
Meanwhile, several storms are heading to the Pacific Northwest. The storms are expected to bring coastal rain, gusty winds and feet of mountain snow to the West through Monday.